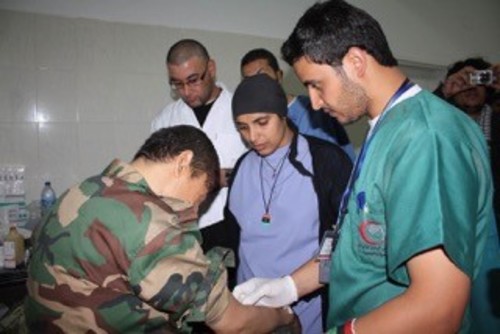 Humanitarian doctor, journalist and film-maker, Saleyha Ahsan has worked in many roles to assist people affected by war and disaster in the Middle East. But as the Syrian Civil War becomes more volatile and dangerous by the day, she worries that failings by the UN and other diplomatic bodies are making it impossible for aid workers to help those who need them most.

Saleyha’s story is an incredible one. Born in Essex, she was the first British Muslim woman to gain a place at the Royal Military Academy, Sandhurst on the Officer Commissioning Course. She became a British Army officer, served in Bosnia as a Medical Support Officer in the Royal Army Medical Corps and then decided to retrain as a doctor. She spent time in Libya during the revolution in 2011 and worked as a humanitarian responder in a bloody conflict – one that she feels is very different to the situation in Syria and Iraq today, particularly in East Aleppo.

Saleyha describes the failings of the international community in vivid terms:

“Firstly, the international community needs to negotiate safe access for humanitarian aid workers to the people who need it most.

“We have international humanitarian law instruments to protect people who are delivering aid and healthcare in times of war, but at the moment they mean nothing because they aren’t being respected or upheld. We can’t get in. From NGOs that I know who are working inside Syria, I have been told categorically that anything that moves gets hit by the Russians.

“One charity told me that there are Russian drones flying around, looking for, and striking, anything that moves. Everything is being watched meticulously.

“There is a massive amount that needs to be done diplomatically to negotiate access. What is being done at the moment is nowhere near enough. Why aren’t the people in positions of power looking as haggard and knackered as the people on the ground in Syria? Why aren’t they working their backsides off to sort this? Why are they not doing what they are paid to do?

“This falls on their shoulders. No-one else can negotiate at that level and get Russia to stop doing what they’re doing. Why has Ban-Ki Moon been attending social and celebratory events when he should have been sorting out the biggest humanitarian disaster of our time? This is serious and I don’t feel that they’re doing enough, with the exception of Matthew Rycroft, the Permanent Representative to the UN, and the United Kingdom’s Mission to the United Nations, whose hard work has not been replicated by representatives of other countries. Matthew Rycroft has rightly condemned the actions of the Syrian government and Russia as ‘sick bloodlust’ and accused them of ‘unleashing a new hell on Aleppo’.

“Everyone has their part to play in this, but I look to the UN. It’s failing, but I look to the UN. We need an established mission statement within which everyone – government, established NGOs, grass-roots NGOs – knows what their role is. The longer this goes on, the more people are dying and suffering, and the closer we get to a very dangerous eventuality in the region.”

As someone who has spent long periods in war zones, and with a network involved in the Middle Eastern conflicts, Saleyha is well-placed to comment on the bleak situation that doctors and others face in areas such as East Aleppo.

She said, “The humanitarian responders and doctors on the ground in areas such as Aleppo are overwhelmed, they’re exhausted. The mass casualty situations are unrelenting. Their workplaces continue to be targeted. Not only are they doing an amazing, heroic job, but they are also being hunted from the air for doing it.

At the moment, there isn’t much hope. You see the reports – the doctors are saying, “World – where are you?” There is no optimism. None.

“They have to be prepared for anything to happen at a moment’s notice. For example, on a quiet afternoon in Syria in a hospital, we were drinking tea. The next moment we heard sirens and there was a mass casualty situation. A bomb had been dropped on a nearby school, badly burning 30+ children, who arrived in our emergency department.

“Humanitarian doctors see pretty awful things, and have to be prepared that, at some point down the road, that experience is going to come back and bite them.

“When you walk away, you have to deal with the guilt of being able to walk away. You think of the people you left behind, who are still living with it and coming into harm’s way.”

Saleyha Ahsan will be speaking about her experiences and the humanitarian aspects of conflict zones in the Middle East at the World Extreme Medicine Conference in Edinburgh on Friday 18 November 2016, which brings together leading experts from around the globe to share learnings on prehospital care, expedition and wilderness medicine, sport, endurance, humanitarian and disaster medicine.

Mark Hannaford, founder of conference organisers World Extreme Medicine, said, “The Middle Eastern arena is a particularly important one for the world in general, but the humanitarian community in particular. Saleyha has an incredible understanding of what’s needed in areas such as Syria and Iraq, and the attendees at the World Extreme Medicine Conference will benefit hugely from her expertise.

“World Extreme Medicine was founded around a campfire in Namibia, and we coined the phrase ‘World Extreme Medicine’ as an umbrella term for all practices of medicine outside of a clinical environment, whether it is prehospital, disaster and humanitarian, endurance, sport, expedition or wilderness medicine.

“Our message is that there is a great diversity of careers in medicine, and that traditional hospital environments are not the only option for a fulfilling career. To put it into a layperson’s terms, there’s never been a more exciting time to work in medicine.”

High resolution imagery and interviews are available on request. Journalists are invited to attend the conference too and are asked to register their interest as early as possible.

About the World Extreme Medicine Conference and Expo:

The World Extreme Medicine Conference and Expo will take place at Dynamic Earth, Edinburgh, EH8 8AS from 18 – 21 November 2016. Bringing together many of the world’s brightest medical minds, it will focus on humanitarian and disaster medicine, expedition medicine, endurance and sports medicine and prehospital medicine. The exposition’s mission is to break down barriers, build bridges and make connections within the extreme medicine community.

The term ‘Extreme Medicine’ was first coined by Mark Hannaford and Sean Hudson as an umbrella term for these extra-clinical medical practices.