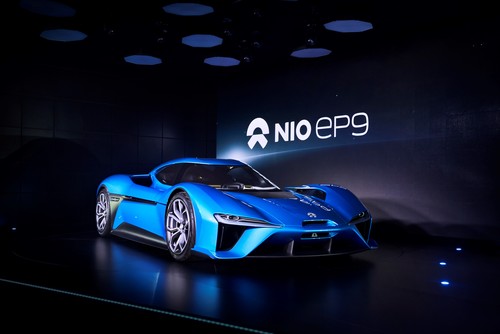 Additionally, the company unveiled its electric supercar, the NIO EP9, which has achieved a new lap record at the Nürburgring Nordschliefe. On October 12th 2016, the EP9 lapped the 20.8km ‘Green Hell’ in 7m 05.12s, beating the previous EV lap record held, marking it out as the fastest electric car in the world. Additionally, on November 4th, it smashed the EV record at Circuit Paul Ricard in France, recording a time of 1m 52.78s, eclipsing the previous record of 2m 40s.

With four high-performance inboard motors and four individual gearboxes, the EP9 delivers 1-MegaWatt of power, equivalent to 1,360PS. The EP9 accelerates from 0-200kph in 7.1 seconds and has a top speed of 313kph. With an interchangeable battery system, the EP9 is designed to be charged in 45 minutes and has a range of 427 kilometres.

The carbon cockpit and chassis embodies a new approach to performance vehicle design to handle the physical demands of a car with 3G cornering capabilities, with added structural solidity and aero efficiency. The EP9 is capable of achieving 24,000 Newtons of downforce at 240kph.

NextEV Founder and Chairman, William Li, said: “Today we launched our electric supercar that broke the record at the Nordschliefe. The NIO EP9 was born to push limits and is the first stage of automotive production for NIO. It is a statement of our vision and technical and manufacturing capabilities. It is a best-in-class product that showcases what is possible with electric vehicles. We believe that when the car ownership experience exceeds expectations, electric vehicles will become the natural choice for everyone, leading to a more sustainable tomorrow. And with that, our vision of a blue sky will come true.”

NextEV is a global start-up, designing and developing smart, high-performance, premium electric vehicles. NextEV has recruited thousands of world-class R&D and design experts from around the world with significant technology and management background from leading automobile and high tech companies. It has more than 2,000 employees in San Jose, Shanghai, Munich, London and eight other locations. In October, NextEV USA announced that it was issued an Autonomous Vehicle Testing Permit by the California DMV and it would begin testing on public roads under the Autonomous Vehicle Tester Program guidelines as it progresses on its path to bring autonomy to market. Investors include Tencent, Temasek, Sequoia Capital, Lenovo, TPG and other world-renowned investment institutions. The company is also involved in the FIA Formula Championship, the world’s first single-seater, all-electric racing series. The NextEV NIO Formula E team won the inaugural drivers’ championship title in 2015.