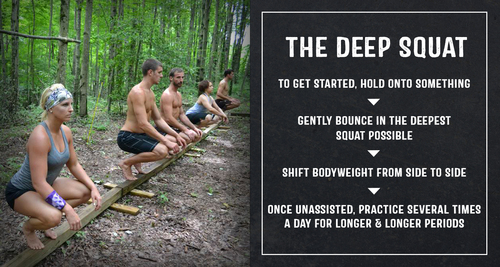 Think you’re fit? Think again. Only 10% of people living in Britain today have the physical prowess necessary to survive if they were transported back to live with cavemen.

With more people hitting the gym than ever, 2,000 Brits were surveyed by SportsShoes.com to find out whether the nation would be fit enough to cope in a Stone Age era.
Historic fitness expert, and natural movement pioneer, Erwan Le Corre provided a list of prehistoric abilities that our “Stone Hench” ancestors could achieve. Each task reflects the kind of outdoor movement that caveman would have to be comfortable with day-in, day-out. As a nation, we failed miserably at being able to compete with our ancient forefathers’ fitness levels, but how do you measure up?

Ground movement:
• Can you hold a deep squat for 30 minutes?
• Could you get up from a seated position, and sit back down, without using your hands, and not losing balance?

Jumping:
• Can you jump the length of your height from a standing position?

Climbing:
• Can you hang from your hands from a bar raised horizontally above your head?
• Could you then pull yourself up and climb on top of this bar?

Lifting and carrying:
• Could you lift an object that’s half your body weight and carry it for a whole mile on uneven terrain?
• Can you carry a person your own weight for half a mile with no pauses?

Throwing and catching:
• Can you hit a small target with a small stone or tennis ball from 15 metres away?
• Could you catch a ball thrown to you from 20 metres away . . . five times in a row?

Don’t get down if you doubt whether your body could complete these tasks, the majority of Brits failed miserably, with the hardest task being the 30 minute deep squat (with just 1% of the nation saying they could do this). The other ground movement task however, standing up and sitting down without using your hands, actually turned out to be the task that most people said they could do! Modern Brits obviously wouldn’t fare too well if they were transported back to the Stone Age, but Le Corre has provided some natural movement exercises to incorporate into your workout, to help shape you up and get you Stone Hench …

Lifting & Carrying
1. Find an uneven object to use as your load (e.g. a large log or rock)
2. Assume a strong square stance, and with an elongated spine keep your arms extended
3. With a firm grip on the object, extend legs and lift the load off the ground
4. Carry the load at hip level, driving your hips forward and leaning slightly backwards
5. Stop and reset as you require

The Deep Squat
1. As a beginner, have something you can hold on to for balance
2. Assume the deepest squat position you can and gently bounce
3. Then shift your body weight from side to side
4. Practice the movement until you can do it unassisted, then practice several times a day making each squat last for longer and longer periods of time

The Tree Climb
1. Assume a double-handed hang (from a bar or raised surface)
2. Swing forward and use the momentum to hook one leg above and over the bar
3. Use your hands to pull your body up and bring both armpits on the bar (the same side as your hooked leg)
4. Swing your free leg to create momentum and push down on the bar to lift yourself up
5. Repeat and rest as required

Further fitness information from Erwan Le Corre can be found on the SportsShoes.com dedicated Training Hub.

Cavemen would have to squat a lot in their day to day lives. From tending to a fire and cooking food, to simply waiting in position ready to run – for prey or from a predator. In addition to this, hunters would have to easily get up and down from a seated position when aiming for a target with a bow, and mothers could be holding their child when they have to quickly get up to run from danger.

Running would have been crucial as the hunt could take you far away from your tribe. Travelling quickly on foot to bring back food to your group would have been essential. Jumping would only be used when necessary by our ancestors; however it would have been imperative at times to cross gaps such as a river or jump over obstacles during a chase.

Climbing was an essential skill that required versatility. It wasn’t just a case of climbing a certain object each time. This could have varied from needing to climb a thin, tall tree for either food or observation, or climbing rocks to gain shelter or other resources.

There is a big difference in how lifting is viewed today in comparison to the era of our hunter gatherer ancestors. Lifting for cavemen was out of necessity, so the process of lifting something overhead to then put it back down would have seemed pointless to them! Instead, being able to lift irregular loads, such as an injured person, rocks, logs or animals was crucial, as well as being able to carry them over long distances and uneven terrain. While cavemen didn’t have the strength of an Olympic weightlifter, as they can lift larger loads comparatively, cavemen had greater overall strength and endurance because of their lifestyle.

Throwing and catching was usually reserved for smaller, lighter objects – so this isn’t a matter of strength but instead accuracy. Throwing would be used in hunting with spears or stones and a good catch would be needed when objects were quickly needed to be passed between the group. Accurate throwing was key to the survival of our ancestors.