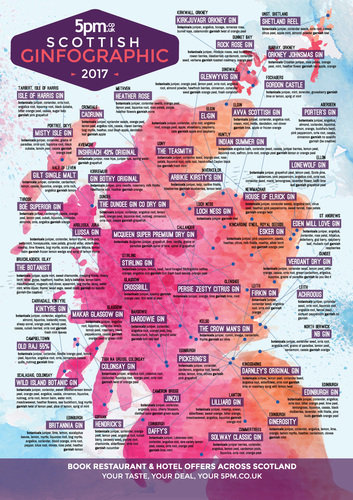 A hugely popular Gin Map of Scotland has been updated for 2017 - with 25 new Scottish gins.

The stunning map, created by restaurant and hotel booking website 5pm.co.uk, launches in time for World Gin Day on 10th June. An incredible 25 new Scottish gins have launched in the last year alone taking the total number of gins on the map to 53 - a visual representation of the Scottish gin boom.

The colourful infographic (or ginfographic) includes the name of the gins, their location, all their botanicals and the garnish recommended by the distiller.

Notable new gins on the map include LoneWolf Gin, produced by craft beer giants BrewDog, two gins from Orkney, Kirkjuvagr and Johnsmas, Misty Isle Gin from Skye, Ginerosity, a social enterprise gin from Edinburgh, along with many more.

The gins reflect the creativity and resourcefulness of the Scottish craft gin market, many of which have beautifully designed bottles, locally foraged botanicals, and exotic garnishes, including kiwi fruit (Shetland Reel) and torn bay leaf (Bardowie Gin).

To celebrate the launch of the new map, 5pm.co.uk is offering gin themed deals like gin masterclasses and afternoon teas, as well as over 30 restaurants giving a serving of gin when you book a meal.

5pm.co.uk is also giving one lucky person the chance to win the ultimate gin lovers package with gin prizes from Glasgow’s Hilton Grosvenor, Finsbay and Citation.

Scottish gin fans who would like to put the map up on their kitchen wall can download the map for free on 5pm.co.uk.

The days of Scottish gin being considered an artisan fad are over. Traditionally associated with being an English drink, 70% of gin consumed in the UK is now made in Scotland.

This is due to the increase in small craft distilleries and the arrival of whisky companies into the gin market, although the 70% figure can also largely be attributed to Diageo relocating production of Gordon’s and Tanquery to Fife in 1998 (both these brands are considered London gins).

Figures from HMRC show exports of the juniper-based spirit rose to record levels last year, increasing 12% to £474m, outperforming exports of British beef and soft drinks. The Wine and Spirit Trade Association predicts that 2017 exports will pass £500m within the year at the current “meteoric” growth rate.

The sales and export figures for last year confirmed the WSTA’s assessment in December that 2016 was a “year of gin”, and was unparalleled since the body began recording sales of alcoholic drinks.

Data from the research company Euromonitor predicts by 2020 gin sales will surpass whisky in the UK.

“The astounding number of gins made in Scotland can clearly be seen in our new map which is a lot fuller than last year’s.”

“Scottish gin continues to be hugely popular with 5pm customers which is why we are delighted to offer excellent value gin tastings and restaurant offers to accompany the launch of our new map.”

“Almost a year after the launch of the 2016 map we still receive regular requests for a printed copy which is why this year we have put it up on our website for gin lovers to download it for free.”

“This World Gin Day, take a look at our map for ginspiration and make your G&T a Scottish one.”

5pm.co.uk was launched in Glasgow in 2001 by restaurateur Ronnie Somerville and businessman Charles Shaw. Originally a restaurant booking website, it has since expanded to offer daily deals, hotels and spa and beauty bookings.

The site also offers consumers the opportunity to read and write reviews. These are real and honest assessments written by customers who have dined at the restaurants reviewed or used the beauty salons in question.

5pm.co.uk works in partnership with media operators, consumer brands and a host of other strategic partners throughout the UK.