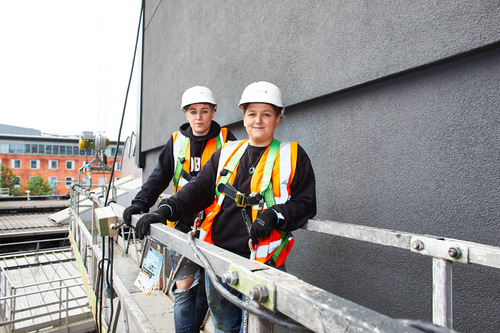 “It is our biggest challenge yet, but we feel ready to give it our all and create something stunning for the community.”

Work begun this morning on an art installation set to give Leeds international acclaim.

The giant artwork, standing 137 ft. (41.9m) tall will be the UK’s tallest piece of street art, as well as being the finishing touch to a major refurbishment of the landmark building which is to be its canvas.

This ambitious and bold mural, entitled ‘Athena Rising’, is to be painted the full length of the east elevation of the Platform building, formerly known as City House, and will be visible from station platforms and beyond.  Work began on Tuesday 6th June and it will take up to four weeks to complete.

The striking design, which will be 137ft x 36ft / 41.9m high and 11m wide, features an owl in flight as its centrepiece, alongside the moon and a crown – a nod to the artists involved.

The huge statement piece is part of the citywide street art project ‘A City Less Grey’, initiated by East Street Arts and fully funded by LeedsBID (Leeds Business Improvement District), animating the city and incorporating works of art onto the buildings and streets of Leeds.

The artists behind the artwork are Nomad Clan - Cbloxx and AYLO, aka Joy Gilleard and Hayley Garner - an internationally-acclaimed street art muralist pair, dubbed 'one of street art's finest female duos'. The pair are experienced giant muralists and have painted some of the largest murals in the North of England - the biggest to date being a seven-storey building in Liverpool.

They will spend their days suspended down the side of the building in a cradle on a harness to hand-paint the artwork, using emulsion and spray paint.

“It's a great privilege to paint something of this scale in Leeds. It's a place that one half of Nomad Clan still thinks of as home, after living and working there for over 8 years. As a West Yorkshire lass born and bred, it really means the world to me!”

“It is our biggest challenge yet, but we feel ready to give it our all and create something stunning for the community.”

The installation is the result of key collaboration between the artists, East Street Arts, LeedsBID, Bruntwood and Network Rail, and is testament to how artists and businesses can work together to produce new pieces of art for the community.

“We’re very excited to be part of this project and pleased that Platform can provide the canvas for this mural. Bruntwood firmly believes that the strength of our cities is directly impacted by social and cultural vibrancy, so it’s great to see citywide projects like ‘A City Less Grey’ bringing organisations from across the region together to create powerful art.

Platform is located directly above Leeds train station and when it’s completed this summer will provide twelve floors of workspace, including a Tech Hub for digital start-ups. The space will be a platform for creativity and innovation, both inside and out. The creation of ‘Athena Rising’ by the very talented team at Nomad Clan fits perfectly with the importance we place on art to inspire people.”

‘A City Less Grey’ sees both local and national artists creating art installations and events across five sites throughout the city centre. This is an exhilarating time for urban art in Leeds that nevertheless recognises its commitment to creating space and opportunities for street art to be part of everyday life.

The project aims to, inject colour into key sites around in the city to enhance the look and feel of areas for residents, commuters and visitors alike, with artwork already in place in Kirkgate and Sovereign Square.

Owls historically signify Intelligence, knowledge, wealth, learning and transition. Most of these ideas are derived from ancient meanings/practices and have been used symbolically by many cultures. Some Native American communities believe owls to be the secret keepers of knowledge due in part to their ability to foretell weather, the owl is sacred to the Greek goddess of learning, Athena, and is even depicted on some Greco-Roman currency as a symbol of status.

Gold Symbols - These design-centric motifs are inspired loosely by the study of mathematics in nature. Geometric symbols are often used in ancient architectural designs as well as being repeated in natural forms; they are a common denominator in humanity that connects us all in a fundamental way.

Moon - This echoes nature’s thematics and cycles but classically symbolises enlightenment, which ties in with the 'knowledgeable owl'.

Crown - One of the affiliated Nomad Clan symbols, the crown is widely used in street art, symbolising being the master of your craft, or having 'paid your dues'. It is highly respected within that arena.

Other F&FS:
‘Athena Rising’ will require approximately 600 tins of Kobra Spraypaint
Nomad Clan will be working on this 8 hours a day

Nomad Clan is the collective of Cbloxx and AYLO, an internationally-acclaimed street art muralist duo based in Manchester.

Cbloxx is a street artist and former Leeds resident. She lived and worked in the city as a professional artist, and was recently commended as one of the world's top 10 female street artists by The Guardian. Aylo is a Manchester-born and bred street artist and paint enthusiast with a solid background in graffiti.

When the pair collaborate, the fusion delivers an unmistakeable style. Each of their murals has a strong significance to the environment it sits in, combining playful scenes (often from local heritage).

Nomad Clan have been noted as 'One of street art’s finest female duos' by Widewalls magazine, the world’s largest street art online publication, as well as 'Street art’s hottest UK talent' by Global Street Art. They were also pegged as one of the top 5 female street artists in the world by The Guardian.

Nomad Clan secured sponsorship with Kobra Spray Paint, making them the first female street artists in the UK to be sponsored by a global paint company.


About East Street Arts:
East Street Arts is a pioneering national arts organisation with international reach. Established in 1993 in Leeds, it supports artists, collectives and emerging arts organisations. This is facilitated through a diverse programme of public activities, working with and in communities, professional support and learning sessions, studio and facility developments and a Temporary Space Programme.

- LeedsBID is a not for profit, business-led organisation which aims to bring Leeds city centre forward, improving experiences, standards and adding value.

- A multi-sector BID, LeedsBID represents more than 1,000 businesses in the city centre (LS1 and LS2 postcodes).

- LeedsBID is the third largest in the UK and largest outside London. It is funded by a 1.25 per cent levy on business rates based on properties above £60,000 rateable value, resulting in a £2.5m investment per year into the city.

- The annual fund is set against an ambitious business plan to deliver a range of improvements including public realm, business investment and increased footfall into the city centre.

- Business Improvement Districts have proved to be highly successful around the UK. There are more than 200 BIDs in the UK, serving more than 75,000 businesses investing over £200 million in their areas each year.

Bruntwood Group is a family-owned and managed property development company with more than £1bn of assets under ownership across 117 properties in Manchester, Liverpool, Leeds and Birmingham and a development pipeline of £1.4bn.

Founded more than 40 years ago, the company employs more than 650 people. It is the majority shareholder in the UK’s leading science and technology park operator Manchester Science Partnerships and in 2014 purchased Alderley Park in Cheshire.

Platform is Bruntwood’s latest development in Leeds and sees the building above Leeds train station, formerly known as City House, being transformed into high quality workspace that meets the needs of modern businesses. Centred around a shared communal lounge and rooftop terrace, Platform will create a new business community with a programme of business, social and wellbeing events.

A thought-leader and a strategic long-term investor, Bruntwood and its people are passionate about supporting communities and the arts. The company donates around 10% of annual profits to local good causes through the Oglesby Charitable Trust and is also the headline sponsor of the Manchester International Festival and RHS Tatton.