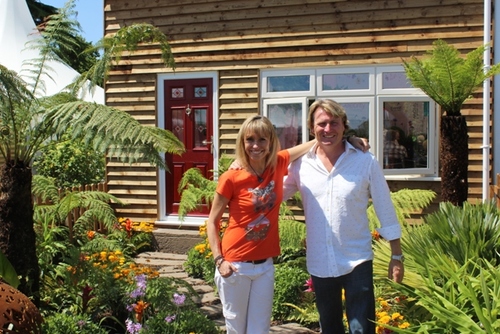 It is a pleasure to see the strength of public feeling for supporting wildlife across the globe, from Borneo to our very own British back gardens

Following a poll held at the RHS Hampton Court Palace Flower Show by Everest, the home improvements company has presented a donation of £4,000 to the Save the Orangutan charity, nominated by TV presenter Michaela Strachan.

Save the Orangutan was one of three charities selected by the BBC’s popular Springwatch presenters. In addition, the two runner-up charities – The Bat Conservation Trust nominated by Chris Packham and the British Trust for Ornithology nominated by Martin Hughes-Games – each received a donation of £2,000.

TV gardener David Domoney created three different front garden displays at the popular horticultural event, each designed as an interpretation of the chosen charity. These were positioned outside the RHS Celebrity Theatre and visitors were given an opportunity to vote for their favourite Everest garden display, with additional votes being collected via social media.

In total, over 4,000 votes were cast during the show. The results were close, with all the gardens proving very popular, but the Save the Orangutan garden display came out on top with 1,648 votes.

Bue Heckmann, Head of Communication at Save the Orangutan, said, “This donation from Everest Home Improvements will make a great difference for distressed and orphaned orangutans on Borneo, and will help ensure that future generations also will be able to experience wild orangutans on Borneo.

“Save the Orangutan greatly appreciates that so many people have supported our cause – together we can continue to make a difference for Borneo's critically endangered orangutan.”

Everest’s Marketing Director, Martin Troughton, says, “A massive thank you goes out to everyone who voted and helped suppport these fantastic charities; they do amazing work and all deserve recognition for what they achieve. David Domoney did a wonderful job creating the garden displays that captured the essence of the three very different charities. It is a pleasure to see the strength of public feeling for supporting wildlife across the globe, from Borneo to our very own British back gardens.”

For further details regarding the gardens and other Everest activities at the show, please visit: http://www.everest.co.uk/hampton-court/

About David Domoney:
David Domoney is a Chartered Horticulturalist and seasoned gardening television presenter and currently presents for ITV’s ‘Love your Garden’ and is also the resident gardening presenter for ITV’s ‘This Morning’. David writes a gardening column for every issue for The Sunday Mirror and for Grow Your Own magazine. He is a winner of 30 RHS Medals with two Best In Show category trophies and is a Governor at the London Colleges of Horticulture. David’s national campaign ‘Cultivation Street’ is now in its 5th year supporting hundreds of community gardening projects and school gardens up and down the country, and he is the Gardening Ambassador for the charity THRIVE.
You can follow David on Facebook @DavidDomoneyTV, Twitter @daviddomoney, Instagram, YouTube, and Pinterest, where he has a combined audience of over a quarter of a million followers.