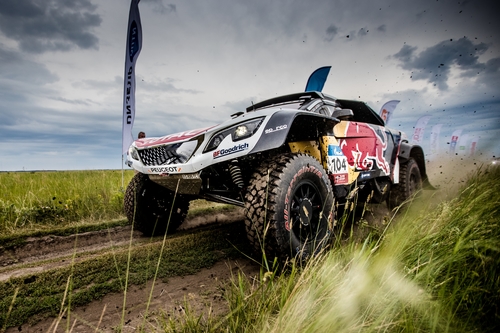 Peugeot has triumphed again on the Silk Way Rally, which took place from Russia to China over two weeks, having also claimed the event last year with Cyril Despres. The French brand set off from the start in Moscow with three cars: one Peugeot DKR Maxi for Loeb, and two examples of the current Peugeot DKR, which also locked out the podium on the Dakar Rally in January.

The Peugeot DKR Maxi featured a wider track that was 10 centimetres longer on each side, as well as other technical improvements that were being trialled on the Silk Way Rally, for the Dakar Rally next year. Sebastien Loeb used it to lead the rally at an impressive pace for the first week, claiming four stage wins in total. With an advantage of more than an hour, Loeb crashed the day after the rest day in Urumqi while driving off the main track to avoid a rocky river bed. His car tripped over a drainage channel, damaging it badly, and although the DKR Maxi was eventually able to be repaired, Loeb sprained a finger and couldn’t continue. Despite this misfortune, the French duo gained more experience and know-how of tackling long distance events.

Following Loeb’s accident, Despres took over the lead, having driven faultlessly from start to finish. He only had two problems, getting stuck in a hole during the first week, and becoming perched on a sand dune three days from the finish, but these were relatively minor issues that didn’t prevent him from leading the rally commandingly, to claim his second victory in cars, after a distinguished career on bikes.

Peterhansel, the winner of the Dakar Rally this year (and the most successful driver in Dakar history) had his chances of Silk Way Rally victory ruined in the first week, when he lost two hours after an accident. Nonetheless, from the bottom of the overall classification he fought back resiliently to claim a top-five finish, setting more fastest stage times on the Silk Way Rally than any other driver. Not only that, but Peterhansel performed a vital role as ‘guardian angel’ over Despres in the closing stages of the rally, helping his colleague to maintain his leadership by being on hand to assist in the event of any issues. This proved to be invaluable, with Despres able to drive securely in the knowledge that his team mate was on hand. This is ‘Team Spirit’ by Team Peugeot Total.

The Silk Way Rally was an essential part of Team Peugeot Total’s preparation for the Dakar Rally, with the team testing numerous technical and logistical solutions that will be put into place on the most famous endurance rally of them all in six months’ time.

“The rally did not end the way we wanted it to for myself and Daniel, but I’m very happy for the whole Peugeot team and especially Cyril and David for this important victory. It was also a great feeling to lead the event with a good margin during the first week, and I think the Maxi was a key factor in helping to achieve this, although it was more suited to certain stages than others. Now we will continue the development work, using all the important lessons we have learned from Silk Way, in preparation for the Dakar.”

Peugeot
Since 1810 Peugeot has been producing durable products of excellence, since 1858 all are branded with the Lion logo – chosen to demonstrate strength, suppleness and swiftness to personify the durability of its products. As one of the earliest automotive producers, the Peugeot brand can trace its roots back to 1889 when it began producing automobiles and since then over 65 million vehicles have been produced, advancing technology with style and efficiency to enhance the customer experience. Demonstrated through its Brand signature ‘Motion & Emotion’, Peugeot is present in 160 countries, has 10,000 franchised Dealerships and is recognised the world over for the quality and design excellence of its products.

Peugeot UK
The UK is the third largest market for Peugeot with its UK Headquarters located in Coventry. The UK car line-up includes the 108, 208, 308, 508, 2008 SUV, 3008 SUV and 5008 SUV supplemented by people-carriers and a four-model van range that includes the Bipper, Partner, Expert and Boxer. The standard car and van line-up is supported by Electric Vehicles. The range includes the iOn and the Electric version of their most popular small van, the Partner Electric.