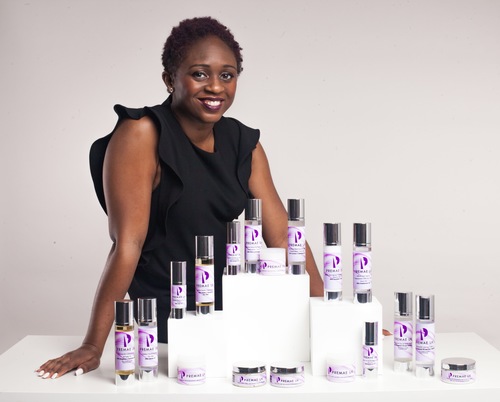 Premae UK (originally Premae Skincare) is to launch its award winning products to millions of homes on Shopping Nation starting this September.

2017 has already seen a phenomenal year of growth for the company founded by Dr Clare Anyiam-Osigwe (B.E.M), who was awarded in the New Year’s Honours list. Dr Clare was also recognised earlier this month by American broadcasting giant B.E.T (Black Entertainment Television) as an influential icon for black women.

Clare Eluka (as she was known then) has worked in beauty since the age of 17. Having suffered with severe Acne and Eczema from an early age, Clare was unable to find a product in the high street to help combat her skin issues without the use of steroids, petroleum or lanolin. It was after working with the Body Shop for 6 years that Clare began making her own products at home. These products soon gained recognition from Allergy UK and on December 1st 2011 the business opened its’ first outlet in London Spitalfields.

Over the past five years, the business has opened outlets in Finchley, Carnaby Street, Bayswater and most recently Harley Street (as a private clinic).
Clare’s award winning products have been well documented for their Alkaline focus to neutralise acidic skin disorders such as Acne, Eczema and Psoriasis.

Clare is also a fully licensed Allergist (one of only 177 currently practising in the UK) and in 2014 Dr Clare received a Doctorate of Science in Bio Chemistry from Trinity College.

The home shopping broadcaster will be showcasing Premae UK four times a week and Dr Clare is excited about going on air to millions of homes across the UK:

“It has been a real feat keeping my live TV debut a secret. I am so thrilled that Premae UK has been chosen to be a flagship beauty brand on the channel. With 8 million Eczema sufferers in the UK alone, we now have the ideal platform to reach our key audiences and help make a greater difference in their daily lives.”

Premae UK launches on Shopping Nation (Sky 681) at 11am and 2pm on Friday 1st September.