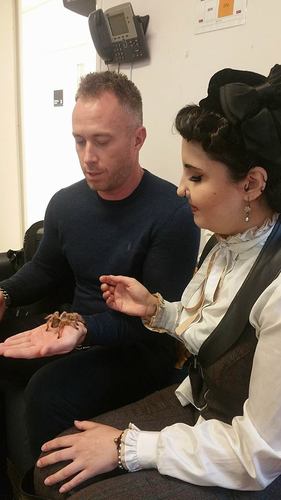 Many people can’t believe that you can destroy a phobia in a few hours but it’s easier to do it fast as that’s how the mind works!

• 55% of women and 18% of men experience a fear of spiders.
• September and October is the spider mating season so more spiders are seen inside houses.
• The Spider Courage Experience recently helped celebrity arachnophobes live on Good Morning Britain.

September and October is also known as ‘Spider Season’ the time of the year when spiders come insider to mate. This is a real problem for the estimated 12 million UK adults that suffer from a fear of spiders. While arachnophobia is one of the most popular phobias it’s also not evenly split with 55% of women and 18% of men experiencing a fear of spiders to some extent.

There is help on hand as The Spider Courage Experience has a 4-hour course which means that people arrive with a fear of spiders and leave with the fear either disappeared or massively reduced to the extent that they can hold a live tarantula.

Run by founder and spider educator Britain Stelly and Harley Street hypnotherapist Adam Cox, The Spider Courage Experience takes place from 1pm to 5pm on selected Saturdays and offer a range of different therapeutic techniques such as, NLP, CBT, hypnotherapy and education that will give participants tools to build confidence in all areas of life beyond just the fear of spiders.

Good Morning Britain recently filmed a spider phobia therapy session with Britain Stelly at the ITV studios and at Chessington World of Adventures to highlight the extent that people with arachnophobia are affected by spiders during this time of year. Even Piers Morgan got so excited about the spiders he tried to kiss one of the tarantula's! Over three days of filming Britain helped more than forty arachnophobes, including some celebrities, to overcome their fears.

James Jordon from Strictly Come Dancing really struggled to even grasp the idea of holding a tarantula and on the first day refused to do it. Even running away when the tarantulas were brought out. By the third day, he held 'Peaches' one of the Spider Courage Experience therapy spiders and was thrilled to do so.
'It was a massive change to be able to do that!" James very proudly exclaimed.

Amber Davies, the recent winner of Love Island was also able to hold a tarantula by the end of the therapy. She was incredibly happy after the experienced and expressed that she felt 'liberated.'

Gemma Magnusson, despite being a champion weight lifter and one of the strongest women in the world had always suffered with arachnophobia but managed to overcome her fears. In an incredibly emotional moment she held a tarantula and let a house spider crawl onto her hand. It completely destroyed her fear in one moment and changer her outlook on spiders all together.

About forty other arachnophobes also overcame their fears, there were many tears of joy throughout the experience made all the more interesting in the setting of Chessington World of Adventures and filmed for national TV.

Adam Cox, the hypnotherapist for The Spider Courage Experience explained why such dramatic changes can happen so quickly. “Phobias are learnt quickly either by an initial sensitising event or often from parents or family members. The mind works quickly to develop a fear as part of a survival strategy. The techniques we use can create an immediate change because we do things quickly. Many people can’t believe that you can destroy a phobia in a few hours but it’s easier to do it fast as that’s how the mind works!”.

Although it’s still spider season right up to Halloween arachnophobes no longer have to let spiders be the thing they fear. Creature courage are offering a free hypnosis download on their site to help get through the rest of the tricky time.

The next Spider Courage Experience takes place at Chessington World of Adventures on the 21st of October.

For additional comment and for imagery to accompany this release please contact Danielle on danielle@kincomms.com or Lewis Gunn on lewis.gunn@kincomms.com or call +44(0)207 7179696

Notes to Editors:
Free places on The Spider Courage Experience for journalists subject to availability.

About Creature Courage:
Creature Courage is a partnership between animal educator Britain Stelly and Harley Street hypnotherapist Adam Cox who run regular workshops that use a combination of cognitive therapy, NLP and hypnotherapy with an immersive therapy option to achieve an incredibly high success rate. Britain and Adam are available for interviews upon request.