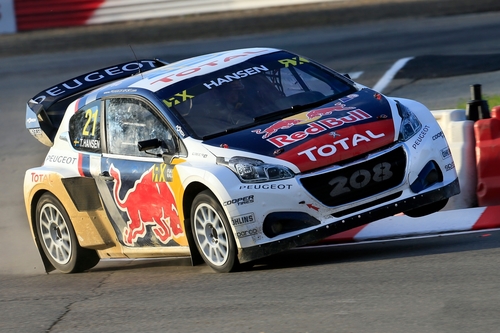 A crowd of almost 75,000 spectators (the record turnout so far this season) watched the Peugeot 208 WRX deliver further evidence of its speed.

Round nine of the 2017 FIA World Rallycross Championship saw Sébastien Loeb and Timmy Hansen keep the crowds entertained at Lohéac, France. Sébastien Loeb pocketed the weekend’s second place to provide the Peugeot 208 WRX with its seventh podium result of the season.

A crowd of almost 75,000 spectators (the record turnout so far this season) watched the Peugeot 208 WRX deliver further evidence of its speed. After winning Q2, Sébastien Loeb topped the provisional order at the end of Day 1’s action which also saw him post a new fastest lap record for the French venue with an impressive 36.095s. On Sunday, he was unfazed as persistent rain swept over eastern Brittany and he followed up second-place in his semi-final with the same result in the final.

Timmy Hansen emerged from qualifying in fourth spot and promptly won the second semi-final which was contested by all three of Team Peugeot Hansen’s Peugeot 208 WRXs. Unfortunately, gearbox gremlins prevented him from reaping the benefit of his efforts in the final.

At the wheel of his 2016-spec car, Kevin Hansen produced yet another polished performance despite the shifting track conditions. In addition to coming first in his Q2 heat, he secured one sixth place and two seventh places in qualifying in total, a sequence that earned him a ticket to line up alongside his team-mates in the second semi-final.

Thanks to the points harvested by Sébastien Loeb and Timmy Hansen in the course of the French weekend, Team Peugeot Hansen has consolidated its grip on second place in the provisional Teams’ standings after pulling 15 points further clear of its closest challenger.
Quote, unquote...

“It was a strong weekend for us. We prepared hard for this one because we wanted to win it and we were effectively competitive. Rain made the going challenging on Sunday but we played our hand well and some good team-work paid off with another top-three finish. We can be pleased with that, even though we felt at one stage that the win might have been possible.”

“I was second in qualifying, second in my semi-final and then second in the final. That’s a lot of second places and the aim is to move one place up the order! It was a good weekend, though, and we came away with a welcome crop of points, which is something that should never be shunned in a sport where there can be so many imponderables. Competing on home soil puts you under a certain amount of pressure and I wanted to put on a show for the 70,000-plus spectators who turned up, many of whom were there to support me. That’s always nice and I wanted to pay them back. I gained a place compared with my result at Lohéac in 2016, so there’s another notch to move up next year!”

“I was delighted after winning my semi-final. I had a good rhythm and Sébastien made a small mistake after my joker lap which gave me the opportunity to move into the lead without taking any unnecessary risks. I was determined to win the final but I took a bit of a gamble at the start and nearly stalled. Even so, I was still second out of the first turn and I managed to maintain a strong pace, although it wasn’t sufficient to stay on Johan’s tail. After that, I made a mistake and, anyway, my gearbox ended up failing.”

“I thoroughly enjoyed competing at Lohéac! My weekend didn’t get off to the best of starts but we responded well and found a good set-up. The reward was three top-seven finishes in qualifying and that did my confidence no end of good! It showed I have the speed to race against the best of them. Two drivers hit me in my semi-final and I picked up a puncture which put paid to any chance I had of reaching the final. It’s a shame, because I think a place in the last six wasn’t out of the question.”

Rallycross events use mixed-surface asphalt/dirt (60%/40%) circuits of about one kilometre in length and can feature one or more jumps. The drivers are knocked out as the weekend progresses and only the six fastest and bravest of them get to contest the final.