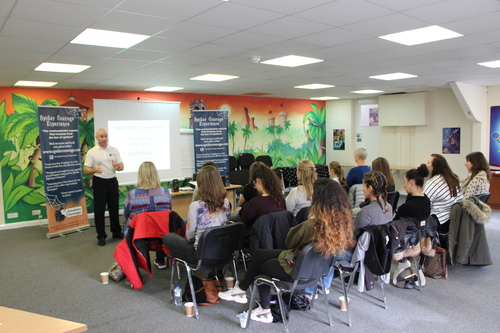 Whether the celebrities know it or not, their immersion into jungle life is a form of therapy

Snakes, spiders, and heights. The top phobias of this years I’m A Celebrity Get Me Out Of Here contestants have been revealed and their first week in the jungle saw various attempts at conquering these fears.

However, Amir Khan is not alone in his fear of snakes and Vanessa White is not alone with her fear of bugs. It turns out an estimated ten percent of the population are afraid of snakes and around 12 million in the UK have a phobia of spiders.

Whether the celebrities know it or not, their immersion into jungle life is a form of therapy and they have every chance of leaving the Australian outback phobia-free.

For those who don’t fancy a fortnight down under, the good news is that there are various therapies which work well in as little as one session, with immersion therapy being one of the most effective treatments.

This type of therapy involves prolonged exposure to the source of fear, providing the opportunity for patients to deal with their anxiety in a safe setting. Although eating various insects is the extreme end of the scale, the famous bush tucker trials faced by the I’m A Celebrity Get Me Out Of Here celebrities, are a blessing in disguise for the contestants looking to conquer their phobias during their stint in the jungle.

Harley Street Hypnotherapist and Founder of Phobia Guru, Adam Cox, explains how the immersion style therapy being experienced by the celebrities can be replicated outside of the jungle.

“Courage is a resource that enables people to act in spite of fears and the purpose of immersion therapy is to reduce fears by facing them. To simply face fears though is often traumatic which is why I’d recommend using hypnosis or NLP before any immersion to the source of the fear so that the mind is accessing resourceful emotional states such as courage, confidence and determination.”

Adam Cox recently helped arachnophobes conquer their fear at Chessington World of Adventures, with a 100% success rate. Celebrities including James Jordan from BBC One’s Strictly Come Dancing and Amber Davies, from ITV2’s Love Island, were able to overcome their fears during the four-hour session.
Filming from the most recent immersion workshop can be viewed here

For those looking to experience the immersion therapy technique for themselves, visit Phobia Guru

Notes to Editor:
Adam Cox is a fully insured clinical hypnotherapist that qualified with the LCCH, is a member of the BSCH (British Society of Clinical Hypnotherapists) and listed on the GHR (General Hypnotherapist Register) Adam has worked with celebrities and CEO’s and is often featured in the UK media.
Visit Phobia Guru for more information.