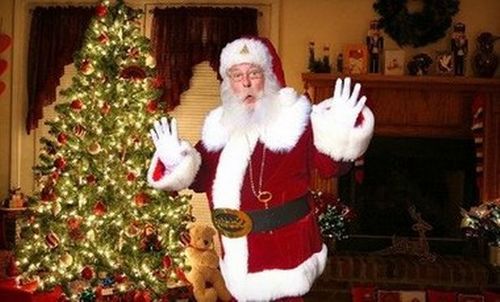 Do your little one's still believe?

If their faith in Santa Claus is wavering - and you’d like to keep the magic going for just a little bit longer - here is a fantastic trick.

Santa CCTV is an online company that offers you the chance of a video of Santa Claus walking around your own home...and catch Santa sneaking in! The life like affects are spooky.

The system requires five photos of your home, with the website recommending one of the outside, a photo of the lounge, one of the kitchen and the stairs/hallway.

The Santa CCTV websites Say: “Once we’ve received your photos our technical wizards, using the magic of green screen digital technology and a little Christmas magicwill turn your home photos into authentic LIVE CCTV video footage with Santa superimposed into them.
“Santa will literally appear to be walking around your house!”

On Christmas morning you can login and view your footage. The two minute footage costs £9.99

Unsurprisingly, the vast majority of adult respondents believe it’s OK for kids to believe in Santa, although they pick age 10 as the age at which children should learn the truth.

Just over one-fifth of parents with kids between the ages of 11 and 17 say their kids still believe in Santa Claus.

Most grownups used to believe, too


Three-quarters of the adults surveyed say they believed in Santa as a kids, up until they reached the age of 9. Refreshingly, there’s little sign of a partisan gap.

Shock: One-sixth of people have spoiled Santa for someone

Twelve percent of respondents say that they’ve told someone who believed in Santa Claus that he didn’t exist.

Julie Hill from WWW.SANTACCTV.CO.UK said 'Christmas is a magical time, and keeping the spirit of Santa Claus alive is important. Our videos are a little bit of Christmas Magic!' Santa CCTV produces a unique personal home surveillance video of Santa in your own home using your own home photos.