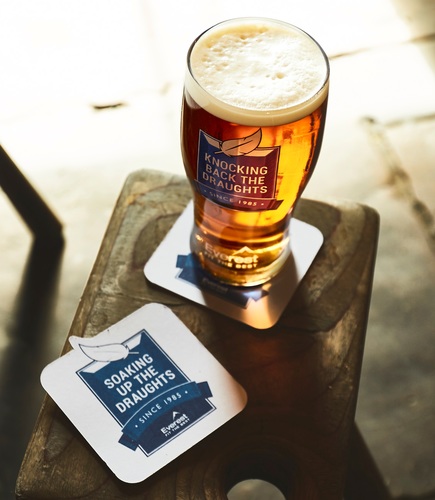 Britain’s highest public house is set to host another ‘first’ for home improvement company Everest this month, providing the location for the launch of a new charitable initiative that will see the firm help people achieve unique and ambitious goals.

The Tan Hill Inn in the Yorkshire Dales was first seen on national television in the 1980s. Its starring role in Everest’s first double glazing advert saw Ted Moult drop a feather in front of a newly installed Everest double glazed window at the inn to demonstrate the window’s impressive draught-proofing abilities – no mean feat given the exposed location of the pub, set 1,732 feet (528 metres) above sea level.

Everest returned to film another advert at the Tan Hill Inn a decade ago, when it introduced TV and radio presenter Craig Doyle as the new face of Everest. He has featured on the company’s adverts ever since. At the time, Everest upgraded the windows at the historic 17th Century inn to ensure it remains as energy efficient and cosy as possible.

Later this month, Craig Doyle and Everest will be returning to the Tan Hill Inn once again for the official launch of the Everest Lewis Golden Foundation. Named in honour of one of Everest’s founders, Lewis Golden OBE, who passed away in late 2017, the Foundation has been set up to provide financial support to help those striving to achieve their ambitions and be the best they can.

Everest’s Marketing Director, Martin Troughton, explains, “Lewis Golden established Everest back in 1965, building a foundation from which the best double glazing company in the UK would grow. We at Everest are enormously proud that his inspiring legacy of success and philanthropy will live on through the Everest Lewis Golden Foundation.”

Selected customers will be joining Everest and Craig Doyle for the launch celebration, including two who have been customers since 1984. TV gardener David Domoney, who has worked with Everest for the past three years, is also expected to attend, along with a number of Everest employees.

Another of Everest’s special guests on the evening will be ex-serviceman Leslie Binns, who was sponsored by Everest last year in his second attempt to reach the summit of Mount Everest, having abandoned his first attempt just 500 metres from the top to help two other climbers who were in danger. As someone who has benefited from Everest’s generous support in the past, Leslie is well placed to talk about the difference that the Everest Lewis Golden Foundation will make to others striving to reach their own summits.

Commenting on the significance of the choice of venue, Martin Troughton added, “The Tan Hill Inn was the obvious choice for us, as over the years we’ve come to consider it as Everest’s spiritual home. Tan Hill provided the backdrop for our first advert with Ted Moult back in 1985, which really brought Everest into the public consciousness, as well as launching Craig Doyle as the new ‘face of Everest’ some ten years ago. Now, as we embark on this new and exciting initiative, it’s only right that we celebrate it with our friends at the Tan Hill Inn, along with some of the other people who have played a part in making us the successful business we are today.”

Special pint glasses and beer mats have been created for the event, which highlight that Everest has been ‘soaking up the draughts’ at Tan Hill since 1985.

In addition, a commemorative feather has been presented to the Tan Hill Inn by Everest as a replacement for the original feather and photograph of Ted Moult, which was stolen from the pub in 2010.

A limited number of press tickets are available for this event at the Tan Hill Inn on Thursday 22 February. If you would like to attend, please register your interest by emailing by close of business on Thursday 15 February.

Everest has been at the forefront of innovation in the home improvement industry for over 50 years, offering an impressive range of high quality windows and doors in UPVC, aluminium and timber, as well as conservatories, orangeries and other home improvement products. With factories in Wales and South-East England, each Everest window is custom made and fitted to the exact millimetre. Its products are continuously tested to the latest security standards as well as a number of bespoke tests demonstrating thermal efficiency, strength and more, ensuring that the homes of Everest customers are some of the warmest, safest and most secure in the country.
www.everest.co.uk