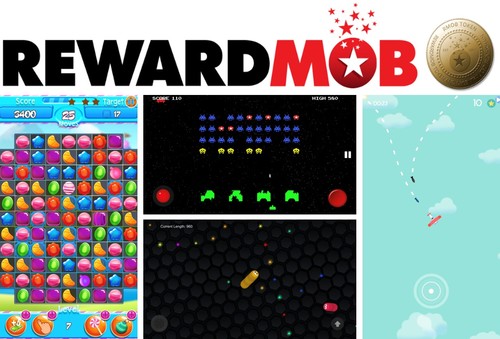 The tournaments occur regularly and allow players aged 18 and over to compete with other gamers all over the world.

RewardMob Digital Inc., a Canadian-based eSports loyalty platform is changing the way rewards are given to players. Since its launch, the RewardMob app has been downloaded more than 100,000 times, and over $17,000 in cash and prizes has already been awarded to players. The business is set to grow in the next six months from $1 million to $15 million.

The RewardMob platform centres around the digital loyalty token RMOB. Once a game is downloaded, players can enter a tournament and start moving up the leader board. Currently, a player will enter a game and progress through the levels to win points. Achievements within the game will give players the chance to spin a wheel to win more points, real life prizes, vouchers or RMOB tokens.

In ‘Paython’, the longer you stay alive in the game, the more points you will earn. In Jackpot Jelly, the more levels a player completes, the more points they earn and have more chances to win. These points propel players up a global leader board and the higher they finish, the better the chance of winning even more RMOB tokens.

This structure can allow games developers to revolutionise the way rewards are given to their players. The platform started with a wide variety of games from the colourful match-3 game ‘Jackpot Jelly’, to chaotic flying game ‘Mayday Payday’ with more titles about to be added. The tournaments occur regularly and allow players aged 18 and over to compete with other gamers all over the world.

RewardMob will offer their cryptocurrency RMOB token to players through a ticket sale which allows access to tournaments. Soon, when a new pay-to-play function is released, players will be able to use these RMOB tokens to purchase entries into tournaments.

Todd Koch, CEO and Co Founder of RewardMob said, “RMOB tokens can’t be purchased directly from RewardMob. They can only be earned or won through our mobile phone app. The RMOB token is an incentive-based loyalty token, which is the ‘central currency’ of our platform. It will be the fuel that runs our competitive mobile gaming machine and our Free-to-Play and soon to be released Pay-to-Play multiplayer tournaments.”

RewardMob has partnered with internationally renowned games developers such as BigCode Games and Dumadu, as well as the pioneering blockchain-based technology platform Waves to continuously raise the standard for mobile gaming and loyalty platforms.
The RewardMob app can be downloaded through the iTunes App Store or Google Play. RewardMob will be hosting their first tournament ticket sale starting on Tuesday February 27, 2018. Please visit https://ticketsale.rewardmob.com/ for more details on the ticket sale.

RewardMob is an innovative global mobile games technology platform that helps games developers with user acquisition, monetization and player retention.
The company is based in Kelowna, near Vancouver, British Columbia, Canada that is set to positively change the business model for games developers in a way which has never been seen before. The RewardMob platform is now circulating digital loyalty tokens to gamers globally known as RMOB.