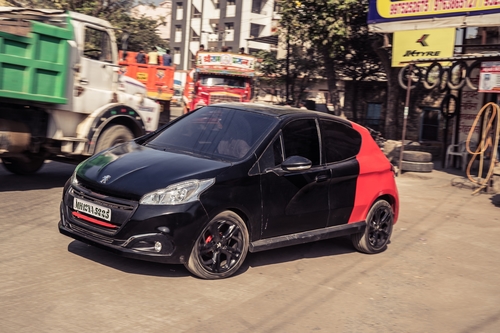 • Peugeot celebrates the 20th anniversary of its acclaimed 206 model this year
• To mark the anniversary and its recent acquisition of the Ambassador brand, Peugeot has modified a Hindustan Ambassador to look like a Peugeot 208 GTi
• The modification was based on the famous 206 advert ‘The Sculptor’, filmed in Jaipur, India, and released in 2003

Peugeot’s best-selling car of all time, the Peugeot 206, celebrates the 20th anniversary of its launch this year.

The original 206 was launched in the form of a hatchback in 1998 and had seen over 5.4 million global sales by December 2005. The car remains Peugeot’s best-selling vehicle to date with 5.1 million sold in Europe and 8.3 million globally.

In celebration of the landmark anniversary, Peugeot took on the challenge of recreating one of the most iconic 206 adverts – ‘The Sculptor’. The advert was originally filmed in Jaipur, India, in 2003 and depicted a young man converting his Ambassador into a 206 after seeing the car in a newspaper advert. The man makes the modifications by repeatedly crashing his Ambassador into a wall and encouraging an elephant to sit on it to make it resemble the Peugeot 206. To see the original 206 advert from 2003, visit: Peugeot 206 'The Sculptor'

In homage to this, the French carmaker converted a Hindustan Ambassador into the Peugeot 208 GTi, using a team of engineers at Ajeenkya D Y Patil University, based in Pune, India. Headed up by Ashish Nar, the team spent several months constructing the vehicle. View the recreated advert here.

Mark Pickles, Peugeot Marketing Director, said: “It’s been 15 years since ‘The Sculptor’ advert appeared on TV screens and as Peugeot has recently acquired the Ambassador brand, it seemed a fitting way to mark the 206’s anniversary year. The outstanding work that the Ajeenkya D Y Patil University team has put into the vehicle modification has been incredible to watch.

“The anniversary of the Peugeot 206 is a great opportunity to recognise the vehicle’s success in becoming Peugeot’s best-selling model of all time. On sale between 1998 and 2008, the 206’s reliable build and iconic design made it a popular choice of vehicle.”

Ashish Nar, Head Designer at DYPDC School of Design of the Ajeenkya D Y Patil University, said: “It has been an exciting and very valuable opportunity working with Peugeot to create this concept vehicle. To see the original Hindustan Ambassador parked in the workshop and to then be a part of its transformation into a new, shiny Peugeot 208 GTi is extremely rewarding for all of the team, in particular the students who had the chance to be a part of this project.”

To find out more about the Peugeot range please visit: www.peugeot.co.uk/


PEUGEOT
Since 1810 Peugeot has been producing durable products of excellence, since 1858 all are branded with the Lion logo – chosen to demonstrate strength, suppleness and swiftness to personify the durability of its products. As one of the earliest automotive producers, the Peugeot brand can trace its roots back to 1889 when it began producing automobiles and since then over 65 million vehicles have been produced, advancing technology with style and efficiency to enhance the customer experience. Peugeot is present in 160 countries, has 10,000 franchised Dealerships and is recognised the world over for the quality and design excellence of its products.

PEUGEOT UK
The UK is the third largest market for Peugeot with its UK Headquarters located in Coventry. The UK car line-up includes the 108, 208, New 308, 508, 2008 SUV, 3008 SUV and All-New 5008 SUV supplemented by people-carriers and a van range that includes the Partner, Expert and Boxer. The standard car and van line-up is supported by Electric Vehicles. The range includes the iOn and the Electric version of its most popular small van, the Partner Electric.