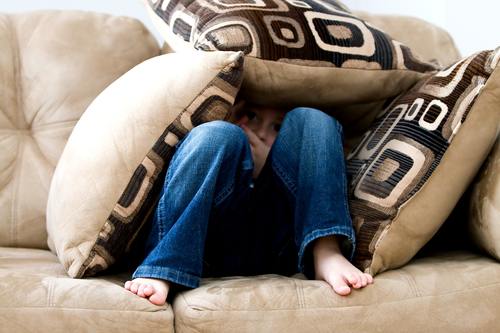 my older brother collected 200 spiders in a jar and decided to put them in my bed. He thought it was funny to watch his sister be petrified

A single ‘sensitising event’ can cause a lifelong phobia

Phobics are easy targets of phobia based ‘pranks’ with clowns, blood and spiders most common

April Fool’s Day this year takes place on Easter Sunday and a leading hypnotherapist and Phobia Guru is highlighting the dangers of fear-based pranks to the 10 million Brits that have a phobia. While most people see April Fool’s as time for fun and harmless jokes, others see it as a horrible day to be endured, as friends and family try to terrify them.

People with phobias routinely find themselves targets of pranks based on what scares them most, which can lead to debilitating panic attacks. The most common phobia pranks are killer clown masks to those with coulrophobia, fake blood to those with hemophobia and spiders to those with arachnophobia.
Phobias are most commonly formed in childhood, so a person can suffer from them for years before seeking help. During this time, they may find themselves the victims of jokes or pranks, like Lisa who was the victim of a prank due to a mild fear of spiders.
Lisa explained “I’m absolutely terrified to the point of tears. When I was about 7 my older brother collected 200 spiders in a jar and decided to put them in my bed. He thought it was funny to watch his sister be petrified. It was like the film arachnophobia. They were everywhere!”

While Lisa’s brother may have found this funny, the extent of this traumatic impacted Lisa into adulthood as the mild fear turned into a fully-fledged phobia. She continued with the phobia until she noticed her young son was also developing a fear of spiders and motivated her to get help. Within a 4-hour spider phobia workshop her phobia was completely cured.
Lisa explained what happened in the short workshop, “I could not be in a room with a spider. There was no way I thought that I could hold a spider. But I held a tarantula! I was so relaxed, I’d never been hypnotised but it was amazing!”

Phobias can lead to more anxiety and can develop into social anxieties and general anxiety disorder. A short hypnosis session can reverse the phobia very quickly. Hypnosis can undo the link between the phobic object and the learned response, meaning people can overcome their fear without difficult or intensive therapy.
Harley Street Hypnotherapist and founder of Phobia Guru Adam Cox explains, “Playing a prank based on someone’s fears may seem like just a bit of fun but the nature of a phobia is that they can be caused by a sensitising event. A prank which creates a highly emotive reaction can cause a lifelong phobia, since most phobics don’t realise that a phobia can be cured in just a few hours”.
Adam continued, “As a Hypnotherapist based in Harley Street not everyone can afford to work with me. To help as many people as possible I host regular workshops at a reduced cost and have created a free download to help people with phobias whether they were caused by a prank or any other reason”.

Hypnotherapy could help thousands of people in the UK laugh this April Fool’s day, instead of living in fear.

For additional comment and for imagery to accompany this release please contact Tom at tom@kincomms.com or Jack at jack@kincomms.com, or you can call on 020 3958 7085

Notes to Editors:
Phobia Prevalence: https://www.sciencedirect.com/science/article/pii/0005796795...
To see Lisa’s video click here
If websites would like the original video in high resolution, just contact us.
Adam Cox is a fully insured clinical hypnotherapist that qualified with the LCCH, is a member of the BSCH (British Society of Clinical Hypnotherapists) and listed on the GHR (General Hypnotherapist Register) http://www.hypnotherapy-directory.org.uk/hypnotherapists/ada... . Adam has worked with celebrities and CEO’s and is often featured in the UK media.
Visit Phobia Guru http://www.phobiaguru.com/ for more information.

Adam Cox recently helped arachnophobes conquer their fear http://creaturecourage.com/ at Chessington World of Adventures, with a 100% success rate. Celebrities including James Jordan from BBC One’s Strictly Come Dancing and Amber Davies, from ITV2’s Love Island, were able to overcome their fears during the four-hour session.
Filming from the most recent immersion workshop can be viewed here https://www.youtube.com/watch?v=dNQZ1ufPDCw

For those looking to experience the immersion therapy technique for themselves, visit Phobia Guru http://www.phobiaguru.com/

This press release was distributed by ResponseSource Press Release Wire on behalf of Kin Communications2 in the following categories: Health, for more information visit https://pressreleasewire.responsesource.com/about.