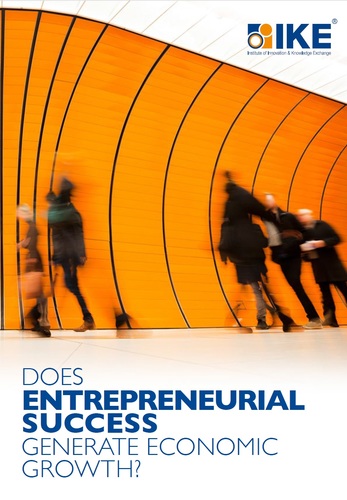 despite huge investment in start-ups, data on ‘Gazelles’ or enterprises less than five years old, and fast growing, is not collected in the UK

Start-ups are everywhere but do they generate economic growth? A new report Does Entrepreneurial Success Generate Economic Growth?published by the Institute of Innovation and Knowledge Exchange (IKE) asks that question. The results are startling and go a long way to understanding why only 10% of start-ups are still in business past the fifteen-year mark. Successive governments have seen Entrepreneurship as the silver bullet to boost productivity and stem economic decline. Over the years, they’ve pumped millions in accelerators, regional innovation initiatives and promotional activities, but has this investment really delivered the growth expected?

The report shows nominal growth in the number of enterprises starting with 0-4 employees. But is this genuine start-up activity, or labour market programmes instituted by government to reduce unemployment figures? Much has been made of the gig economy phenomenon producing clever start-ups, but in reality, the report shows all it has driven is low paid and insecure work. Most new enterprises do not grow and nearly 60 per cent fail before five years. A striking feature of the research showed, despite investment, there was very little change in survival rates across a five-year period, with 10% failing in first year, 25% by the second, 40% by the third and by year four almost half had died. The survival rate per sector shown that 51% of enterprises set up in Property survived, following by IT and Comms with 49% surviving. The sector where the most business deaths occurred was in Accommodation and Food with nearly 65% having failed after 5 years.

So where is all this high growth that’s being touted actually happening? Where are those Gazelles that business schools talk about? IT and Comms have the highest proportion of high growth enterprises, followed unbelievably, by the water supply, sewerage, waste management and remediation sector. Well they do say where there’s muck there’s brass!

Half the would-be entrepreneurs cited the perceived barrier to starting a business is funding. Once again, perception and reality show very different pictures. The UK invested 10 Million GB Pounds of risk capital into high tech accelerators producing 1,124 start-ups. Crowdfunding has also been successful in the UK for generating funds for start-ups totaling 2.4 Billion Euro targeted at 419 funding initiatives across 16 platforms, giving an average of 5.7 Million Euro per funded initiative. The next country to have a good crowdfunding investment is Germany with 108 Million Euro but still some 2.29 Billion Euro less than the crowdfunded investment in the UK. There is also a high intensity of venture capital investments primarily focused on innovative tech start-ups, with 0.081% of GDP going into venture capital, ranking the UK third across Europe, topped only by Denmark and Luxembourg who have considerably smaller GDPs.

It is therefore incredible, despite huge investment in start-ups, data on ‘Gazelles’ or enterprises less than five years old, and fast growing, is not collected in the UK. The UK provides Eurostat with data on high growth enterprises defined as those with at least 10 employees and an average employee growth rate of 10% or more per year, over a three-year period. These enterprises are not necessarily start-ups or new, but the data gives an indication on which sectors are growing the fastest. Across Europe, the UK is middling, with a 10.82% of all enterprises with 10 or more people growing year on year. Higher enterprise growth rates are being experienced by smaller countries (Ireland nearly 15% and Malta at almost 13%). This growth is perhaps related to the fact that smaller countries have less overall business stock and can target their policies more accurately than larger countries.

Innovation, it’s said, is intrinsically linked with entrepreneurship and often spoken in the same breath but are start-ups always innovative? The report found that product or process innovation activities are predominately found in enterprises of 250 or more employees with 69% of all activity produced by this enterprises in this size range being innovation-focused. Overall, Germany has the highest proportion of innovative companies in Europe.

The UK’s stagnation in productivity has also fueled a renewed focus on Entrepreneurship to drive up growth. Gross Value Added in Euro in the 0-9 employee enterprise size range in the UK stands at 71% in productivity gains, however productivity drops in 9-49 employee range, and this could be aligned to the lower innovation activities in 10-49 employee at 58% of all activities being innovative in nature.

The report identified a key measure of whether or not the UK has appropriate conditions and polices to support entrepreneurship is ‘how many jobs are created 15 years’ after the enterprises were formed. In 1998, 239,600 were established and 15 years later 26,200 were surviving, a 10.9 per cent survival rate. Across the fifteen-year period, the 1-4 employee sized enterprises were particularly hard hit by attrition and overall, there was a fall in employment of 4,200. However, in the long term, major gains to net employment came from those enterprises that started up at birth with more than 20 employees. The main losses arose when smaller start-ups expanded to 20 plus employees, which suggests problems in trying to manage growth. It is also possible that the start-ups didn’t have the skills or capital to come through the 2008 recession, as the majority of losses occurred within the first nine years.

So why are almost 60% of start-ups failing before their fifth year of operation? Is it that the policies and interventions aren’t supporting these new businesses? Or is it something else? A lack of more diverse skills than the ones needed to create the business in the first place, has been found as contributing to start-up death. Larger teams in bigger start-ups have better survival rates, are more innovative, become successful exporters, have greater business longevity and drive employment growth. Perhaps, a greater emphasis on the building of entrepreneurial teams, with a focus on developing business innovation skills, would deliver the employment and productivity growth so often sought after by the policy makers!

It is of course ironic, that despite the significant investment and promotion given to start-ups, enticement to start a business is still not an attractive option for many, with one in five and one in ten people respectively thinking it is easier to work for someone else and are happy with their current situation. Clearly, the risks outweigh the benefits, and the grass, for many across the UK is definitively greener where they’re already sat!