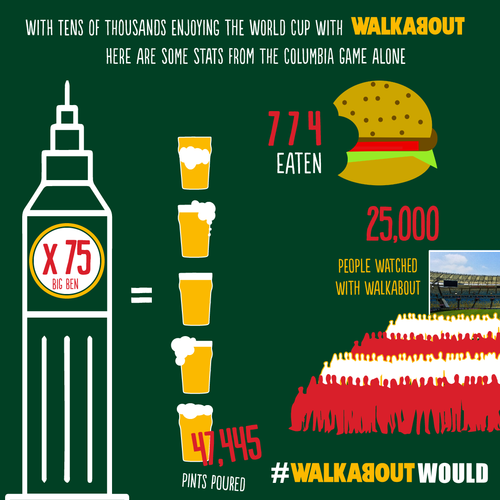 Follow Suit and Wear a Waistcoat with Walkabout
Walkabout launches national ‘Wear a Waistcoat’ week
Honour sartorial Southgate for your chance to win!

So far we’ve seen nine goals for England and twenty four countries exit stage left, but there are still Three Lions… and only one Gareth Southgate!

At top sports bar, Walkabout, tens of thousands have followed every kick of the tournament and with 774 burgers enjoyed and 47,445 pints served to over 25,000 people for the Columbia game alone, there is no better place to enjoy this weekend’s quarter final match.

As England prepare to face Sweden, Walkabout is asking its customers nationwide to honour the man whose leadership has seen our national side finally win on penalties by wearing a waistcoat to watch this Saturday’s game. And not only that, they’ve officially registered ‘National Wear a Waistcoat Week’ to encourage others to do the same, showing very visibly how much support is behind our national side.

Running from Saturday 7th until Friday 13 July, fans are being encouraged to head on down to Walkabout wearing their waist coat and uploading a picture to social feeds for the chance to win a VIP experience to the final with your very own booth, with a food and drink extravaganza and your own personal Walkabout World Cup replica trophy.

A spokesperson from Walkabout said: “We’ve been delighted by how many England fans have adopted Walkabout as their home for the football. Sure, it was a shame to see the Socceroos leave the competition at the group stages but now we’re throwing our full support behind England. Gareth Southgate has reenergized English football, as anyone who’s been to a Walkabout to watch a match will tell you! We think it’s right that people put on a waistcoat and enjoy a discounted drink in his honour.”