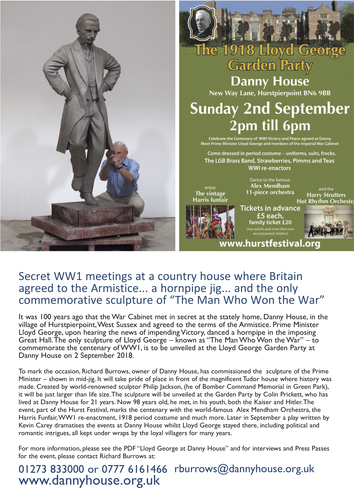 It was 100 years ago that the War Cabinet met in secret at the stately home, Danny House, in the village of Hurstpierpoint, West Sussex and agreed to the terms of the Armistice. Prime Minister Lloyd George, upon hearing the news of impending Victory, danced a hornpipe in the imposing Great Hall. The only sculpture of Lloyd George – known as “The Man Who Won the War” – to commemorate the centenary of WW1, is to be unveiled at the Lloyd George Garden Party at Danny House on 2 September 2018.

To mark the occasion, Richard Burrows, owner of Danny House, has commissioned the sculpture of the Prime Minister – shown in mid-jig. It will take pride of place in front of the magnificent Tudor house where history was made. Created by world-renowned sculptor Philip Jackson, (he of Bomber Command Memorial in Green Park), it will be just larger than life size. The sculpture will be unveiled at the Garden Party by Colin Prickett, who has lived at Danny House for 21 years. Now 98 years old, he met, in his youth, both the Kaiser and Hitler. The event, part of the Hurst Festival, marks the centenary with the world-famous Alex Mendham Orchestra, the Harris Funfair, WW1 re-enactment, 1918 period costume and much more. Later in September a play written by Kevin Carey dramatises the events at Danny House whilst Lloyd George stayed there, including political and romantic intrigues, all kept under wraps by the loyal villagers for many years.

For more information, please see the PDF “Lloyd George at Danny House” and for interviews and Press Passes for the event, please contact Richard Burrows at:
01273 833000 or 0777 6161466 rburrows@dannyhouse.org.uk www.dannyhouse.org.uk