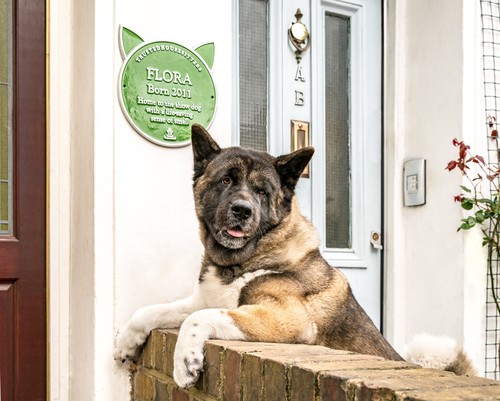 • The new scheme by house and pet sitting business TrustedHousesitters see green plaques placed on homes across the nation, to recognise beloved pets in the same way noteworthy humans have been for over 150 years
• The first animals to be honoured include a heart-warming whippet, a bully-fighting cat and a life-saving dog
• Pet owners across the country can now put forward their own pet, to become a part of the scheme in 2019

24th September 2018: A new scheme launches nationwide today, which is dedicated to celebrating the nation’s most amazing animals.

‘Pet Plaques’ by TrustedHousesitters - the biggest house and pet sitting business in the world - will see green markers attached to houses up and down the country, which commemorate the achievements of our beloved companions. Each plaque gives a brief description of the animal’s achievement, and even features ears to set the new plaques apart from any others.

Commemorative plaques such as the English Heritage blue plaque scheme, have honoured notable men and women for over 150 years by placing a marker on the homes they worked or lived in, but a scheme has never been solely dedicated to animals. The launch of Pet Plaques aims to change this, by giving deserving animals their own place in history.

Recent research by the brand also helped to inspire the reason behind launching a plaque scheme solely for pets, as it revealed that some of the nation’s animal owners value their pets just as much, if not more, than friends or family. One in five (21%) UK pet owners admit that they would rather spend time with their pet, than their partner, and just over a third (35%) even admitted that they would rather be with their pet than their friends.

Amongst the very first pets being honoured with a plaque are:

Walnut’s story warmed the hearts of a nation and quickly made headlines, when his owner, Mark, sent an open invitation for fellow dog lovers to join them on their final walk. From across the country, hundreds of two and four-legged friends travelled to Walnut's favourite beach to walk alongside him and say farewell before he was laid to rest.

When Ethan Fenton, 9, was being picked on by bullies, his heroic cat Smudge didn’t stand back and purr. Instead, the feline took action, pouncing on the chest of one of the bigger bullies, who had pushed frightened Ethan to the ground. Shocked by Smudge’s smart move, the boy and his friends then ran away finally leaving Ethan alone.

Before meeting Flora, her owner Robert was diagnosed with cardiac syncope. The condition causes temporary loss of consciousness and can consequently lead to near-fatal situations. Fortunately for Robert, as well as becoming a multi-award winner at Crufts, his new Akita developed a life-saving sense of smell that could predict his oncoming blackouts.

Tim Lyons, Managing Director at TrustedHousesitters said: “There are countless stories across the country of pets who have a special bond with their owners or do something incredibly heroic.

“For over 150 years we have honoured deserving people with blue plaques, we felt it was time to celebrate the nation’s love for our animals by honouring them in a similar way. We’re now looking forward to hearing more inspirational tales of cherished pets as the scheme continues to grow.”

Over 20 plaques have so far been placed on homes all over the UK. For stories and locations of the current markers, or to nominate your own pet to be one of the next in line to receive a plaque, please visit: trustedhousesitters.com/pet-plaques

For more information, contact Richard Paul at Propellernet on Richard@propellernet.co.uk or 01273 760975

TrustedHousesitters was founded in 2010 by Andy and Rachel Peck and is based in Brighton, England. It is now the world’s largest house-sitting business with more five-star reviews than any other travel or pet company on TrustPilot, facilitating more than two million nights of house and pet sitting globally, and saving its members more than £100 million in accommodation and pet care costs since its inception.

Its community, which is nearly half a million strong, is spread across more than 130 countries.