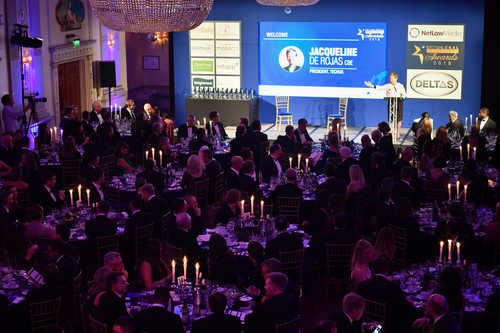 Conveyancing platforms, pro-bono chat bots, global law firms and AI solutions vendors were among the winners of the British Legal Technology Awards 2018 (BTLA), organised by Netlaw Media. The winners of these prestigious awards were announced Thursday 1 November 2018 at a glittering ceremony, held at the Plaisterers’ Hall in central London. The event, hosted by comedian Tim Vine, was attended by 300 guests, dignitaries and shortlisted candidates from the world of legal IT and security.

The announcement of the BLTA winners followed a rigorous vetting process, undertaken over several months, overseen by a 19-strong independent expert judging panel.
Three groups of award winners were announced at the Plaisterers’ Hall ceremony – one for UK and EU law firms, barristers chambers and in-house legal teams, and the other for legal IT vendors and consultants. The award winners were as follows:

Categories for Legal Services Providers
Most Innovative Firm of the Year – Sponsored by Mobliciti
Winner: My Home Move

Technology Team of the Year - Sponsored by InfoTrack
Winner: Keoghs

Social Impact of the Year- Sponsored by OneTrust
Winner: Amicable

Categories for Legal IT Suppliers
New IT Product of the Year
Winner: iManage

IT Security Provider of the Year – Sponsored by DELTAS
Winner: Tessian

The BLTA judging panel also bestowed a lifetime achievement award on Janet Day, in recognition of the instrumental role she has had in shaping the role of IT Directors and driving the evolution and successful impact of technology within legal IT services for over 40 years.

Closing the event’s proceedings, Jacqueline de Rojas, president of techUK, said the BLTA ceremony “offers the perfect opportunity to celebrate these achievements and shine a light on true innovation, passion and drive. This is what makes the legal sector thrive and I, for one, am excited about our connected future. At a time where processes and jobs are continuously evolving and sometimes becoming obsolete, new solutions like these that we have been privileged to judge, are needed to stay ahead of the game, to ensure that we remain competitive and that we stay at the top of our game.”

Ms de Rojas’ comments were echoed by Netlaw Media UK and EMEA Managing Director Frances Armstrong, whose company organised the BLTAs. “Since the opening of nominations for the 2018 BLTAs in February, it’s been captivating to see the continued development of innovation within the past year within the UK and EU legal sectors, driven by legal practices and solutions providers alike,” she said. “Netlaw Media is delighted to continue showcasing and celebrating the role that current and new technologies can play in transforming the UK and European legal professions.”

About ‘The British Legal Technology Awards 2018’:

Nominations for the British Legal Technology Awards 2018 opened in February this year. A shortlist of finalists was announced during a social media campaign in September. The 2018 Awards were a complete sell out with additional tables added to meet demand and will return to the legal events calendar in November 2019.
The 19-strong BLTA judging panel was chaired by techUK president Jacqueline de Rojas. The panel also included IT heads from several international law firms, professors and consultants who specialise in the legal sector, and representatives from the legal IT vendor and consultancy community.

The British Legal Technology Awards ceremony was the 20th event organised by Netlaw Media since the company was formed in 2008.