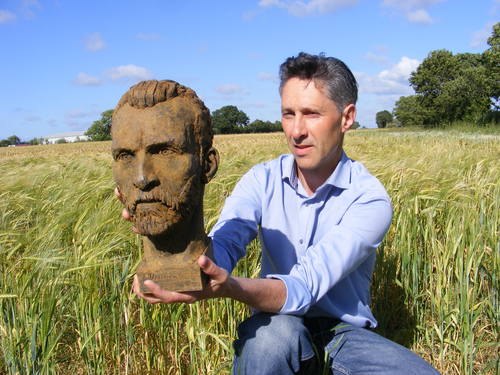 WHAT: Sculpture of Vincent Van Gogh to be Installed in London
WHERE: Van Gogh Walk, Brixton, SW9 0RD
WHEN: Friday 16th November 2018

The first public sculpture of Vincent Willem Van Gogh 1853-1890 in England is to be installed on Friday 16th November at Van Gogh Walk, Brixton, SW9 0RD.

The sculpture will be installed without ceremony.

The artist will be available for interview throughout the installation at Van Gogh Walk, Brixton, SW9 0RD - between 10.30am and 2.30pm on Friday 16th November.

A Press Conference will also be held at 4pm on Friday 16th November at the Cafe Van Gogh, 88 Brixton Road, London, SW9 6BE

The work is part of a year long project "A Year With Vincent" by award winning artist Anthony Padgett whose bust of First World War poet Wilfred Owen recently featured on the BBC News at Ten. Padgett has an MA in Contemporary Art from Wimbledon School of Art and has sculptures in major galleries, museums, libraries and in Ripon Cathedral. It is his second public sculpture in London, the first being of 1920s poet Humbert Wolfe at Eccleston Square Gardens, near Victoria Station.

There are 7 of the sculptures (each a different colour) to be permanently sited in England, France, Holland and Belgium:
- Espace Van Gogh in Arles, France, where Van Gogh lived as an artist 1888-1889 in the Yellow House and where he infamously cut his ear off,
- in Nuenen, Holland, where he lived at the family home and was an artist 1883-1885
- in the Borinage in Belgium where he was a missionary to the mining community 1878-1879.
- in 4 places Vincent lived in the UK at Brixton, Ramsgate, Isleworth and Welwyn.

The base of the sculpture incorporates items from his life including 19th century Parisian paints and the same pipe that he smoked that is on Vincent's famous "Chair" painting in the National Gallery.

The work is part of a resurgance of interest in Van Gogh that coincides with the releases of the films "Loving Vincent" (last year) and "At Eternity's Gate" with Willem Dafoe (this year) and with next year's the blockbuster exhibition at Tate Britain of Van Gogh's work which will celebrate his time in England.

The award winning bust is part of artist Anthony Padgett's "A Year With Vincent" where he has created updated versions of 67 of Vincent's work as well as a number of contemporary artworks. Details can be seen on www.ayearwithvincent.co.uk