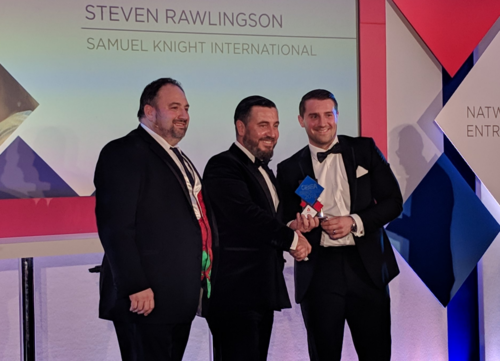 Global recruitment and project manpower provider, specialising in the energy and rail sectors, Samuel Knight International, has been awarded Team of the Year in the Great British Entrepreneur Awards. Sponsored by NatWest, the awards were held in five cities including Birmingham, Manchester, Cardiff, Edinburgh and London. The winners for the Great British Entrepreneur awards in Manchester, were announced yesterday evening (15th November) at the Old Trafford.

Now in their 6th year, the awards have a long-standing history of celebrating the best of British business and championing the stories of entrepreneurs who have later gone on to become household names. The NatWest Great British Entrepreneur Awards acknowledge the hard work and truly inspiring stories of businesses in Great Britain who are the agents of positive change.

Judges for the inaugural Entrepreneurs’ Team of the Year award recognised Samuel Knight for its tremendous team performance within the last four years. Transforming into a £16 million pound turnover company, increasing headcount from four to fifty employees and expanding from one to three offices with bases in Newcastle, London and Bristol.

“To be nominated for, and win this award is not only an honour but also a testament to our hard work, determination and the talent we have invested in. Over the past year we have focused significantly on growing the team and creating a culture people want to be a part of and I am incredibly proud of what we have all achieved together.”

“What sets us apart from the competition is that Samuel Knight is a people centric business and this has helped us evolve and grow. We are all working towards the same vision: building a workforce of employees with shared values and helping them to achieve their goals. Our fantastic team has played a huge role in this exciting journey so far and we’re especially proud to be recognised for this award on a national scale, and to represent the North East which is where it all began.”