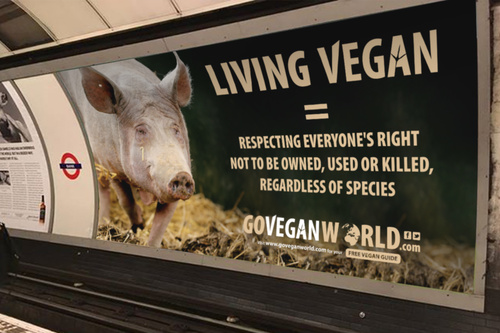 The Go Vegan World ads remind us of our victims; they remind us that each one of us is morally obliged to stop using other animals and go vegan.

Go Vegan World is running a massive campaign across Ireland and the UK during Christmas and the New Year. It features over 2000 innovative ads that encourage people who are not yet vegan to consider becoming vegan as a way of living that protects the rights of other animals.

It is important at the outset to define veganism as a way of living that protects the rights of other sentient animals. Other animals share our capacity for physical and psychological feelings. They have brains that enable them to be aware of themselves and their world. Therefore, in recognition of these facts, they share our fundamental rights not to be owned, used, harmed or killed.

Christmas is traditionally a time of good will, generosity and concern for the less fortunate and the oppressed. Our oppression of other animals goes unnoticed for the most part simply because they are members of different species to us. But being different is not a justification for ignoring their exploitation and neither is it a justification for exploiting them in the first place.

When confronted with the mess we have created with respect to environmental destruction and climate change, and when we realise that we are violently oppressing defenceless, innocent beings, it is tempting for many people to take refuge through denial, minimisation and failure to act. We tend to dissociate from the truth that demands that we change, pushing facts to the back of our minds for the short-term gain of convenience. " The Go Vegan World ads remind us of our victims; they remind us that each one of us is morally obliged to stop using other animals and go vegan. "

The campaign will run throughout December and January in Ireland and the UK. It includes 650 UK bus ads and the first large screen vegan video ads in Ireland. Ads will also appear on billboards, streets, bus shelters, bathrooms, the London Underground, Bus and Train stations in Ireland, the Irish Times, Hotpress Magazine, and on social media.