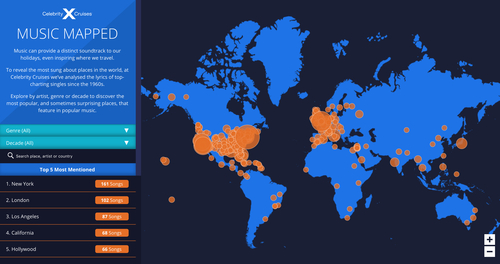 - The lyrics of more than 200,000 songs have been analysed to reveal the world's most sung about cities
- New York is the most referenced city, with London in second place, LA in third, Paris in fourth and Miami in fifth
- Unexpected locations mentioned in popular music include: Barnsley, Hastings, Preston and Southend
- Drake, Jay-Z and Elvis Presley mention the most places around the world in their songs


Newly released data research reveals the places around the world that have been mentioned the most in popular music since the 60s, and the results can be seen in a first-of-its-kind interactive music map here: Music Mapped.

According to the data commissioned by Celebrity Cruises, New York is the most popular place in the world for artists to sing about – it’s featured in the lyrics of 161 charting singles, but London is not far behind in second place, with the UK's capital being mentioned in 102 songs since the 60s.

The Top 20 Most Sung About Cities In The World:

The large-scale data research provides a fascinating look into which towns, cities, states and neighbourhoods appear to have inspired the most music and how places around the world are mentioned by different genres and artists throughout the decades.

Dr. Jon Stewart, BA (Hons) Music Business Course Leader at British Institute of Modern Music (BIMM) Institute Brighton and popular music expert, commented: “Music is inevitably tied to location – who could imagine The Beach Boys without references to California? Without the geographical touchpoints found in Britpop, it simply wouldn’t make sense. And, how would the blues, country, and rock and roll genres be received if they were stripped of all connections to the geography and politics of the American deep south that inspired them?”

To create this unique music mapping tool, Celebrity Cruises used manual and automated analysis to scan the lyrics of over 200,000 songs that charted in the top 40 of the US Billboard Hot 100 chart or the UK Official Singles chart since 1960, to find mentions of cities, towns, neighbourhoods and states. This extensive research resulted in a final data set of over 2,000 songs by 897 artists with 422 different places being mentioned around the world.

Jo Rzymowska, Managing Director of Celebrity Cruises commented:
“Music can inspire where we travel and bring back emotive memories of the places we’ve been – often providing a distinct soundtrack to our holidays and adventures. We love that this innovative data project creates a fun and engaging way to explore the world. By marrying music and travel over the past 60 years, we hope the project sparks conversation and inspiration for your next trip.”


How Artists Sing About The World

Canadian rapper Drake is the artist that mentions the most places in the world in his music. The platinum-selling musician mentions a whopping 29 places in his songs or those he’s featured on, including his hometown Toronto (on tracks: Summer Sixteen, Successful and Pop That) and perhaps more surprisingly, places such as Versailles in France and Rotterdam in The Netherlands (on Diplomatic Immunity) and Madrid in Spain (on Blue Tint).

The Top 10 Artists Who Mention The Most Places In Their Music:

When looking at how different genres mention places, New York, Los Angeles and London feature highly across the board, but focusing in on Folk, World and Country, the most mentioned place is Georgia. Surprisingly the most mentioned location in R&B is Texas, California is the most sung about place in Jazz, and Kingston in Jamaica, Brooklyn and London are the most sung about places in Reggae.

To explore the map, visit: www.celebritycruises.co.uk/music-mapped


Data included within the interactive map:
The lyrics of over 200,000 singles that charted in the top 40 of the US Billboard Hot 100 and UK Official Singles chart since 1960 were analysed to find mentions of well-known and highly populated cities, neighbourhoods and states.

The interactive map was created using linguistics analysis and D3 dynamic data visualisation technology. Data science specialists Datanauts built a script to pull every available song lyric that had charted in the UK and US top 40 over the last 60 years, using linguistic and syntax analysis every place name was then extracted. This was done by pinpointing capitalisation and usage of preposition and postposition language to ensure accuracy and correct context. This list was then cross referenced with an extensive list of every well-known and highly populated geographical place in the world. After ensuring usage intention, GPS co-ordinates were added by querying the place names automatically against Google Maps API and genre and ‘first charted’ dates were added.

Leading data visualisation designer Peter Cook of Animated Data, whose work has appeared on the BBC and London Datastore, then embedded the data within an interactive visualisation using a mixture of JavaScript, D3 and Preact. The result is an easy-to-use and engaging tool that gives you a world of lyrics at your fingertips.

Celebrity Cruises' iconic "X" is the mark of modern luxury, with its cool, contemporary design and warm spaces; dining experiences where the design of the venues is as important as the cuisine; and the amazing service that only Celebrity can provide, all created to provide an unmatchable experience for vacationers’ precious time.