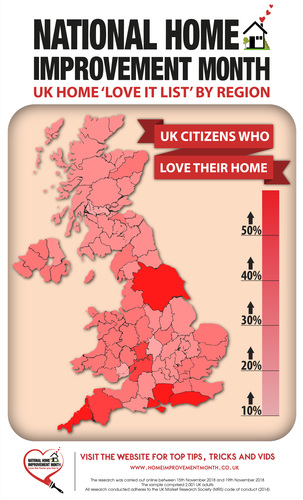 “People are inspired by what they see (or don’t see) on television.

• Rise of cooking programmes and T.V chefs are culprits of declining DIY trends in the UK.
• New Research reveals that 55% of the UK rarely make home improvements and one in three don’t feel comfortable hanging a photo on a wall.
• Trends indicate those aged 45+ exposed to DIY programmes are more competent at DIY and home improvements.

New research conducted by National Home Improvement Month has shown that incredibly 69% of Brits don’t love the home that they live in. This is a direct consequence of the decline in DIY programmes such as DIY SOS and the rising popularity of T.V chefs and baking enthusiasts.

On every TV guide across the UK, you’ll find popular cooking shows such as Master Chef, The Great British Bake Off and The Great British Kitchen, while property renovation programmes feature less and less, a stark contrast to a decade ago when DIY television was in its heyday.

The early noughties boasted the golden generation of DIY programmes such as Changing Rooms, DIY SOS and 60 Minute Makeover. However, in the past decade, these shows have hung up their white overalls and ceased production. Attempts to revive these hit DIY shows have resulted in multiple changes with DIY SOS transitioning into The Big Build in 2010 while 60-minute makeover transformed into Peter Andre’s 60 Minute Makeover in 2013.

The generational movement between cooking programmes and home improvement shows has predominately been attributed to changing attitudes and culture in TV habits.

As National Home Improvement Month ambassador and DIY, interior design presenter Julia Kendell comments “People are inspired by what they see (or don’t see) on television. The massive popularity of Marie Kondo’s decluttering book and programme is evidence there is still a huge enthusiasm for the home. Personally, I believe the desire for a beautiful, well-organised home is as strong as ever.”

When DIY SOS first lit our screens up in the nineties’, the largest viewership demographic the TV show had was 15 – 35-year-olds who picked up an interest in home renovations and the feel-good excitement that came with it. In 2010, a new breed of television captured the nation’s attention called The Great British Bake Off. With a captivating host, Mary Berry captured the hearts of a new generation of young viewers from 15 – 24-year-olds, and the focus of DIY home improvements immediately changed to baking.

With baking becoming a generational interest for 15-24-year-olds, National Home Improvement Month found that those aged 15-24 find it difficult to make basic home improvements. A staggering 33% of 18 – 24-year-olds declared they feel uncomfortable with hanging a picture and 52% feel uncomfortable putting together flat pack furniture – a stark contrast to 77% of 45+ year olds didn’t have a problem with either.

Looking forward, Julia Kendell agrees that the lack of DIY TV shows is affecting our enthusiasm for DIY. Julia notes, “Programming tends to be cyclical, so with any luck, we’ll see a new raft of DIY and interiors shows on screen before long! I’m hopeful they’ll be representative of the importance of creating a well-balanced environment in our homes that supports our health and well-being.”

“That’s why the aim of National Home Improvement Month is simply to encourage people to #MakeOneChange.”

For further information, images or a copy of the full research, please contact Tom on Thomas@kincomms.com or Amy Boreham on Amy@kincomms.com. Alternatively you can call 02039587175.

To celebrate NHIM – we are challenging you to make one change with the opportunity to win £750 worth of fantastic home improvement goodies from National Home Improvement Sponsors Harris, Valspar Paints and Schneider Electrics.

The lucky winner will receive £750 worth of decorating and electrical labour, along with a host of useful products, including practical paint brushes and rollers, gorgeous paint in your choice of colour as well as switches and sockets for that special finishing touch!

All you have to do is email us a picture of your home improvements to info@homeimprovementmonth.co.uk, along with the reasons that you decided to #MakeOneChange (in no more than 30 words) before 30th April 2019.

The research was carried out online from 15-19 November 2018 by Vital Research on behalf of BHETA. The research sample comprised 2,001 UK home owners. All research conducted adheres to the UK Market Research Society (MRS) code of conduct (2014) and all research processes comply with the DPA (1998).
Additional research supported by Broadcasters’ Audience Research Board (BARB), and subject to BARB’s copyright regulations.
OFFICIAL AMBASSADORS
More information on the official ambassadors is available via the respective websites for Julia Kendell and Georgina Burnett