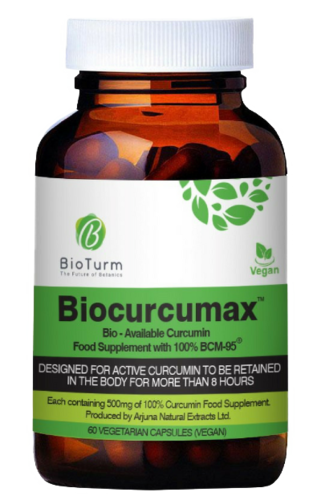 Defined as chronic inflammation of the joints - arthritis is an auto-immune disease that affects more than ten million people in the UK, and treating arthritis has long been a challenge as the pharmaceutical industry has yet to come up with any answers to cure this disease.

While there might be no way to completely cure or prevent arthritis, there are natural supplements you can use to relieve pain and inflammation. Studies have shown that curcumin - an active component of the common spice turmeric - possesses numerous antioxidant and anti-inflammatory properties that benefit people suffering from inflammation and pain.

The importance of curcumin seems to hinge on its anti-inflammatory health benefits with research published by the Arthritis Foundation 1 and the British Journal of Pharmacology 2 finding a potential link between the anti-inflammatory treatment curcumin can relieve, and the chronic inflammatory disorder that primarily affects the whole body.

A clinical trial in 2012 found BCM-95 (Biocurcumax), a highly bioavailable curcumin provided the same amount of benefits for rheumatoid arthritis - a common form of arthritis and chronic systemic inflammatory disorder – provided the same amount of benefits of Diclofenac, a rheumatoid arthritis drug had that was available on prescription. 3 When tested, BCM-95 curcumin had the highest impact for reducing disease symptoms, followed by BCM-95 curcumin with Diclofenac sodium, with the Diclofenac sodium-alone group third.

“While working in the health industry, I realised that prevention of diseases will the future of mainstream medicine, and the main focus.” says Philipose. “My sole goal was to invest in significant research and to educate as many people as possible about evidence based natural solutions in its most powerful form. “

Already backed with over 25 years of trusted research and clinical trials, Biocurcumax or BCM-95 as it is popularly known is the world’s most preferred turmeric extract, but Philipose is hoping curcumin has a higher purpose than being a widely known cleansing agent.

As Philipose notes, “It’s time we did justice to natural evidence based medicine because science should not be partisan. As the first step to achieve this goal, we’ve focused on the rich legacy of Ayurveda that has primarily focused on prevention and has benefited humanity for thousands of years. “

With over 25 years of worldwide trust, Biocurcumax or BCM-95 as it is popularly known, has the reputation to be the world’s most preferred turmeric extract because BCM 95 extract stays active in your blood for over 8-10 hours, and is 700% more bio-available than natural curcumin. Philipose is confident that more research will reveal curcumin and Biocurcumax’s true potential.

As Suphil describes, “Considering the US food and drug administration has already approved BCM-95 for investigational Alzheimer’s research, it’s really interesting to discover that Southampton Biomedical Research Centre and the University of Oxford have confirmed that Arthritis drugs could halve the risk of Alzheimer’s disease. It’s a solution that is without any adverse effects both in sync with nature and yet effective. “

NOTES TO EDITORS
To find out more about turmeric, curcumin or BCM-95/Biocurcumax visit https://www.bioturm.co.uk.

For more information or images please contact Thomas Gabbidon at Kin Communications on thomas@kincomms.com, or call 020 3958 7175.

ABOUT CURCUMIN AND TURMERIC
Curcumin is the active ingredient in turmeric and has been used in India for thousands of years as a spice and medicinal herb.

This naturally occurring substance is well-known for possessing anti-inflammatory properties related to alleviating arthritis, and also thought to have stroke and depression preventing properties.

ABOUT BIOCURCUMAX
Biocurcumax enhances the bio-availability of active unconjugated curcumin in the blood for more than eight hours. It is taken by millions of people in over fifty countries and has been the subject of over 50 successful medical studies across the globe. Biocurcumax is a patented food supplement approved by the United States Food and Drug Administration and distributed by BioTurm UK Ltd. Biocurcumax contains 100% purified turmeric extract Curcugreen TM, a curcuminoid complex with the essential oil of turmeric root, a patented product of Arjuna Natural Ltd.

The British Journal of Nutrition noted that “in order for curcumin to elicit a greater nutraceutical benefit, it is critical that more of it is able to enter the bloodstream.” and that “unmodified curcumin is reported to be retained in the blood for 2-5 hours in humans.” It found that whilst “multiple over-the-counter brands are available” which “claim increased bio-availability compared with unformulated curcumin” but that “independent comparative analysis is essential.” It concluded that “two formulations BCM-95 (Biocurcumax) and Longvida currently have the strongest independent data available in human trials” and that “retention of a modified form of curcumin, BCM-95 (Biocurcumax) is reported as exceeding eight hours.”