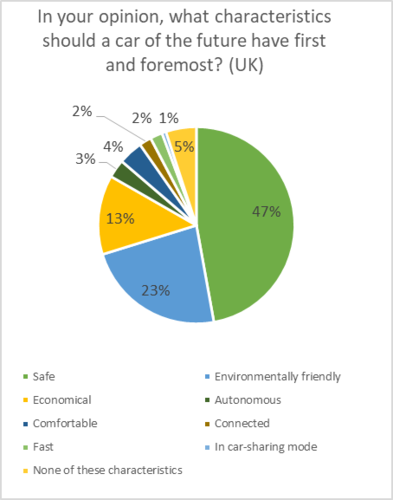 The response from Europeans is clear: the car of the future is all about improved safety.

A recent YouGov survey carried out for Faurecia Clarion Electronics highlights safety and sustainability as the key considerations for future cars in the UK, France, Germany and Italy.

Research conducted by Faurecia Clarion Electronics in the UK, France, Germany and Italy has shed light on some of the key features people want to see in cars in the future.

This figure was slightly lower in France, Germany and Italy where 36% of respondents listed safety.
Interestingly, safety appears to be more of a priority for UK respondents aged 45 and above where half the people questioned said this was the most important feature for the car of the future.

In terms of driving innovations, respondents from the four countries also agree that the most important need for the car of the future is to anticipate hazards and other road dangers (France 56%, Germany 50%, Italy 48% and UK 45%).

Europeans appreciate the benefits of the connected car, which shares information with its environment to find spaces in busy car parks and adapt its route based on real-time traffic.

The survey indicates that attitudes towards driverless cars are divided. Currently, 28% of respondents overall expressed a clear positive attitude towards self-driving cars, Italy being at the forefront with 46% in favour compared with less than a quarter of those questioned in the UK.

“Anticipating dangers on the road, alerting the emergency services in the event of an accident, parking unassisted and performing manoeuvres so the driver doesn’t have to… The response from Europeans is clear: the car of the future is all about improved safety. However, these aspirations seem to suggest a lack of knowledge about the driver-assist systems already available on the market. When we talk about the autonomous car of the future, we perhaps tend to forget about the safety features already available at lower levels of autonomy. Patrick Koller, CEO of Faurecia, has already pointed this out: ‘The movement towards autonomous vehicles will be gradual’. In fact, rather than talking about a car revolution, we are busy working on its evolution – the technology deployed is only of any value if it is known about, understood, accepted and used. It takes time to build a sustainable future,” explains Sébastien Brame, Senior Manager at Faurecia Clarion Electronics.

“The survey shows that while being eco-friendly is important for young people in particular, it is even more so for non-car owners (34% versus 22% among car owners). This shows that the type of change we are hoping for in cars is not only a matter for drivers, but is part of a wider social shift”, according to Sébastien Brame’s analysis.

While only 6% of UK respondents, compared with 12% in Italy, say their car should be as comfortable as their home, 13% UK respondents say a car interior should adapt to a driver’s needs. British people also appear to be neutral about feeling at home in their cars (53%) contrasting with France, where 44% enthusiastically welcome the idea of being able to feel at home in a car. Communication is a more important factor in the UK with 29% of respondents saying this was a major feature of the car of the future, compared with 15% respondents in France.

“The comfort offered to passengers should be an increasingly important factor for future generations. Society is looking for comfort and personalised experiences, and that evolution in people’s requirements, together with technological advances, will lead to the development of a new kind of car interior. The car is more than 100 years old! The interior of the future will therefore require time to take shape. But it will take more than an approach focused only on the seating, for example: comfort will be smart too, the cockpit becoming the thinking organ that manages and optimises the user’s experience of the car to the smallest details.” Sébastien Brame predicts.

All of the information presented here comes from YouGov France, unless stated otherwise. The survey was carried out among a representative sample of the national population of each country aged over 18: the sample comprised 1,000 respondents for France, 1,014 for Italy, 2,049 for Germany and 2,304 for the United Kingdom. The survey was carried out online among YouGov France’s own sample group, from 25 to 27 March 2019, using the quota method.

Clarion has been an international leader in the field of on-board audio and electronics since 1940. Based in Japan, the company joined the French group Faurecia in 2019 to become its dedicated on-board electronics division.

The activities of Faurecia Clarion Electronics centre on the research and development, design, manufacture and sale of navigation, infotainment, communication and security products for cars, leisure vehicles, commercial vehicles, HGVs and other means of transport and machinery.

The company is also expanding its offer to include on-board driving assistance, self-parking and 360° camera systems. It collaborates with the majority of the world’s car manufacturers. Clarion has won multiple awards from independent organisations for the innovation and reliability of its products. The company, which employs nearly 9,000 people, relies on engineering, production, marketing and sales subsidiaries in Europe, North and South America, Asia and Australia. www.clarion.com