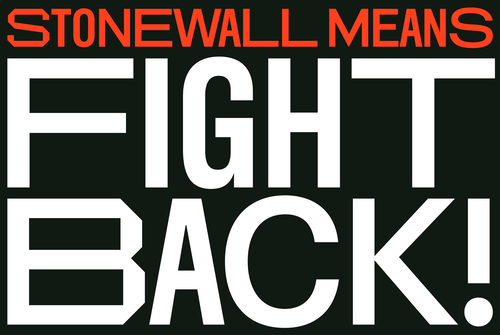 London, UK — Dating platform Feeld has released a typeface to commemorate Pride’s Jubilee and the 50th anniversary of the Stonewall riots. Stonewall 50 is offered as a free download – though Feeld encourages users to make a donation to Pride in London or their local LGBTQI+ organisation in lieu of payment. The font may be used to create posters, banners, t-shirts, and other materials in advance of the upcoming Pride parades around the world.

‘The inspiration came from the vernacular, handmade letterforms adorning the placards of the Stonewall protesters. The typeface draws on concepts of personal expression and individuality; it celebrates the beauty and dignity of each human being, their uniqueness, and the validity of their personal experience of sexuality and gender.’ comments Feeld’s Creative Director, Steve O Connell.

This dynamic typeface comes with three in-built widths and styles, all of which reference the variety of lettering found on Stonewall placards. When used, the font generates a code to randomly select a variation of width and style, resulting in a diverse and visually arresting arrangement of characters.

Stonewall 50’s mission is to serve as a tribute to those that have fought for LGBTQI+ equality and freedom, and to encourage action where inequality and oppression still exist. Carrying a rich historical legacy rendered in a contemporary aesthetic, Stonewall 50 aims to make an impactful contribution to LGBTQI+ visual culture.

Feeld's first participation in Pride in London will take place on 6 July. The campaign 'Free To Be' celebrates the freedoms and privileges made possible by the hard work and continued resistance of LGBTQI+ communities over the last 50 years.

The company has also released a set of 5 new app icons inspired by Pride, which are available to users globally.

The first dating app for couples and singles, Feeld is an inclusive space where the curious and open-minded come together. Open to all genders and sexual identities, Feeld allows members to pair profiles with a partner, a lover or a curious friend. Founded in London in 2014, Feeld is a fully remote, design-led company built upon an ethos of transparency and openness.