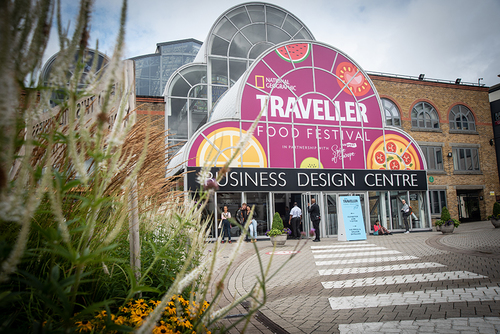 Over the weekend of 20-21 July, 5,455 food-lovers poured into Business Design Centre in Islington, London. They were treated to a spectacular celebration of the culinary world.

Glen Mutel, editor of National Geographic Traveller Food, said: “Launching a new event is always a risky business, but I’m delighted with how our inaugural Food Festival played out and was received.

“I was particularly struck by the passion of our audience. Not only was the venue packed, but it was packed with enthusiasts — the type of visitors who are as keen to see Adam Handling plate up some lobster as they are to attend a wine tutorial, watch a panel debate on food trends or learn how to make Guadeloupean flambé bananas. And next year, we’ll hopefully have even more to offer them, as we bring the worlds of food and travel together once again.”

On the festival floor, visitors were able to truly taste the world, as 45 exhibitors offered food, drink and expertise, with major participants including the Hungarian Tourism Agency, Greece National Tourism Organisation, Wales Food and Drink and The Wine Society. In the two masterclass venues, some of the world’s top chefs recreated dishes from as far afield as Israel, Thailand, Malta and Guadeloupe.

The feedback, both on the day and post-event, has been overwhelmingly positive. Next year’s event —scheduled to be held, once again, at the Business Design Centre next summer— promises to be even bigger and better.

45 exhibitors on the main floor

59 performances from chefs, authors and speakers across the four stages

53 members of press in attendance across the weekend

77 pieces of coverage produced (both pre- and post-event)

@JINGTea “We thoroughly enjoyed hosting a masterclass on Saturday and Sunday at the @NatGeoTravelUK Food Festival. Our Brand Ambassador, Felicity, took the audience on a journey through single-origin teas, sampling our Competition Winning Organic Darjeeling First Flush tea.”
@Raymond_Blanc “An impromptu, outdoor book signing @NatGeoTravelUK festival. In the glorious sunshine thank you to everyone who came to hear my talk and waited patiently for their books to be signed. I am so grateful. Bon weekend @BloomsburyCooks @headlinepg
@soniafigone “@NatGeoTravelUKYesterday was wonderful. Met great people and destinations tried amazing food and attended interesting masterclasses We need a bigger #NGTFoodFestival next year with even more destinations”