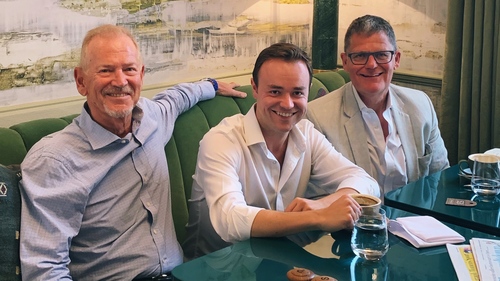 On July 30th 2019 PushFar’s CEO, Ed Johnson, announced the formation of its new board of directors, with the appointments of its chairman, Martin Sherwood, and financial director, Robin Wilkinson and the formation of its advisory board, led by chairman Martin Kirke. These new appointments and board formations are part of a wider organisational shake-up of the fast-growing mentoring network and SaaS platform.

PushFar, which describes itself as a ‘world first’ career progression platform, helps both individuals and organisations with all aspects of mentoring and career progression. Primarily through a series of tools such as mentor matching, mentor relationship management and mentor reporting, PushFar’s cloud-based platform offers an innovative way for organisations to scale and sustain their mentoring programmes. In addition to this, the platform helps individuals with further career progression through highly personalised professional event recommendations, job listings and networking opportunities. Since the launch at the beginning of 2019, the platform has gained traction with more than 8,000 registered users.

Chairman of the board of directors, Martin Sherwood, brings with him a wealth of experience in the start-up and early stage sector. He is founder and director of the EIS Association, the trade body for the Enterprise and Seed Enterprise Investment Schemes, and most recently was a founding partner of Enterprise Investment Partners (EIP), which recently merged with Kin Capital and now trades under the Kin Capital name. Of his appointment, Martin said “As someone who already provides mentoring to young people wanting to gain a foothold in financial services, PushFar is a business I am excited to be supporting as it grows. PushFar’s technology is innovative, forward-thinking and well-positioned for individuals, HR directors and organisations to invest in as traditional career and employment ‘rules’ are being shaken-up.”

Robin Wilkinson, appointed as financial director for PushFar, recently retired from Ares Management Limited, the fund manager where he was the UK Financial Controller. Having qualified as a Chartered Accountant with Peat, Marwick & Mitchell (now KPMG) in 1979, Robin worked subsequently at Bankers Trust, and Goldman Sachs in financial review and control, then moving to Chief Financial Officer roles for two long/short equity hedge fund managers, and a tradable credit start-up which after 5 years was acquired by Ares.

CEO and Co-Founder Ed Johnson said “It is fantastic to be welcoming Martin and Robin onto our board. The experience that both these individuals bring, combined with the formation of our advisory board and the appointment of Martin Kirke, put us in an incredible position to grow and develop PushFar, of which I a hugely excited.”

In addition to the new appointments on the directors’ board, PushFar announces its formation of the advisory board, which will steer the business’s product development and engagement with the HR community. This advisory board will be led by chairman Martin Kirke, who enjoyed a successful career as an HR Director in both the private and public sector, including Group HR Director at the Post Office and BP HR Director Operations Europe, Middle East, Africa and Asia-Pacific. Martin is now a qualified coach, mentor, non-executive director, writer and speaker.

Of his appointment, Martin said: “I am delighted to have been selected as the first Chair of the Advisory Board for PushFar. Mentoring is the Cinderella skill which has been neglected for too long. Through use of the latest technology PushFar matches mentors and mentees developing critical skills in both. There’s a huge social benefit through spreading knowledge and skills between people. I love the simplicity and the benefits it brings employees of companies or members of professional associations. It’s a great attraction and retention tool and supports diversity giving BAME, LGBTQ and other networks a powerful mentoring tool.”