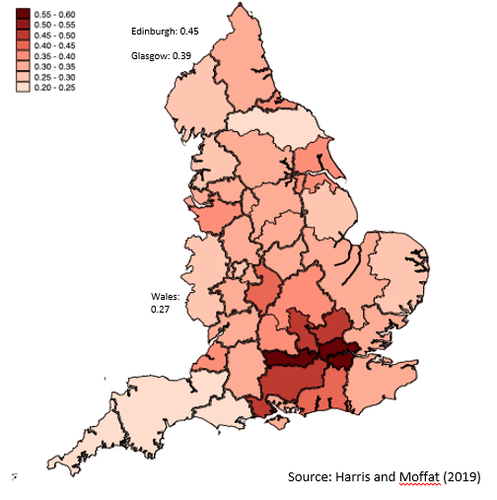 London is the most productive region in the UK, closely followed by the South East and Scotland, according to new research from Durham University Business School. The researchers also found that the least productive region was Wales, with London having productivity levels over double the amount of Wales.

This research was conducted by Richard Harris and John Moffat, who are both Professors of Economics at Durham University Business School. To collect these results, the researchers used state-of-the-art econometric techniques to analyse ONS data between the years 2010-2016, to produce levels of productivity in each plant of Great Britain.

The researchers produce estimates of total factor productivity, as opposed to labour productivity, because it measures the productivity of all factors of production, including capital and intermediate inputs. Economists believe this is a more accurate way to evaluate actual productivity.

“A major priority today for the UK Government is to boost productivity as well as achieve greater ‘spatial rebalancing’ of the economy to address the so-called north-south divide in terms of GDP per capita. Our research clearly shows that the levels of productivity are drastically higher in London and its surrounding areas in the South East, such as Thames Valley, Hertfordshire and so on. However, locational factors do account for, on average, between 41-50% of the differential between London and other Local Economic Partnerships, depending on the sector considered, clearly showcasing the importance for companies to be based in, or near, London."

The researchers not only categorised levels of productivity in terms of the eleven different regions, but also evaluated this in terms of twelve leading cities and their non-city hinterlands; and English LEPs, accompanied by Glasgow, Edinburgh, the rest of Scotland and Wales. The research also estimates levels of productivity sector per sector, covering manufacturing, high-tech, and services and so on.

In 2018, the UK government required LEPs to create Local Industrial Strategies that clearly defined priorities for how cities, towns and rural areas will maximise their contribution to UK productivity. Until now, there has been a lack of appropriate data on productivity differences across the country. In providing estimates of total factor productivity (TFP) to address this data deficiency, this research shows the extent to which London and the South East dominate UK productivity.

You can download the full report, which includes the breakdowns of productivity region per region, city per city and LEP per LEP, here - (https://www.dropbox.com/s/dn1m49s0bsk99m3/The%20Geographical...)


If you would like more information on the research, or to speak with Professor Richard Harris, please get in touch with Peter Remon at BlueSky PR peter@bluesky-pr.com