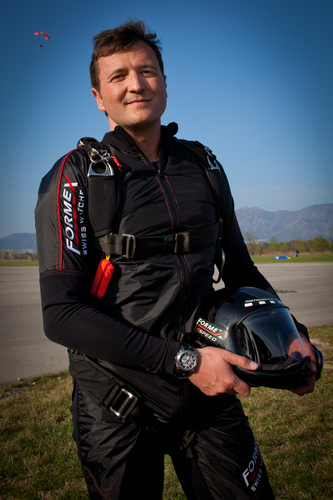 A superhero adventurer will attempt to break the world record for fastest ever horizontal free fall – and travel faster than a Formula One racing car.

Skydiver Marc Hauser intends to leap from a plane above Spain and fly forward rather than downwards, without even wearing a wingsuit.

The aim is to prove that humans really can fly in a straight line without wings, and to smash his own world record of 304km/h in the process.

If he succeeds, he will not only be travelling faster than many Formula One racing cars can reach on the ground but also faster than a four-seater Cessna Skyhawk airplane, which has a top speed in the air of 302km/h.

Marc, who also became the first person to jump into the jet stream in 2018, said: “I have always wanted to be able to fly like a superhero – and today that is actually possible. I want to show that we really don’t need wings to fly.”

The Swiss-born adventurer has set himself a target of 340km/h in his latest record attempt and will need strong high-altitude winds of up to 60-80km/h to achieve it.

That kind of speed would put him close to the 346km/h record for the current Formula One season, set in Baku by Alexander Albon’s Toro Rosso Honda.

But what makes his attempt, and his obsession, all the more astonishing is that he suffers from a fear of heights!

“There have been plenty of obstacles along the way,” he admitted. “But I have learned you need a little fear and a lot of courage to dream big, innovate, and achieve your goals. I’m determined to show people the bravery it takes to get from dreaming to doing.”

Hauser, whose motto is ‘free flight instead of free fall’ also believes the renewable energy within the jet stream could have huge potential for the world.

He added: “There are already a few start-ups innovating in the field and developing technology for high-altitude kites and wind turbines. I’ve been in the jet stream and if we could successfully harness just a small percentage of its energy potential, all the world’s energy needs could be met.”

Notes to Editors
Prior to his jump and during his training, Marc Hauser is available for interviews.

About Marc Hauser:
Marc Hauser (born in 1971) is a professional skydiver, pilot, artist and entrepreneur. He lives with his two daughters in Bern, Switzerland. In addition to his work as an environmental activist and record parachutist, he is the founder and owner of the naming agency erfolgswelle® AG. He is also active internationally as a keynote speaker, delivering tailored motivational speeches in English, German and French.

His history making first jump into the jet stream was documented by the BBC World News’ ‘Chasing the Jet Stream: A record-breaking exploration of high-altitude wind power.’