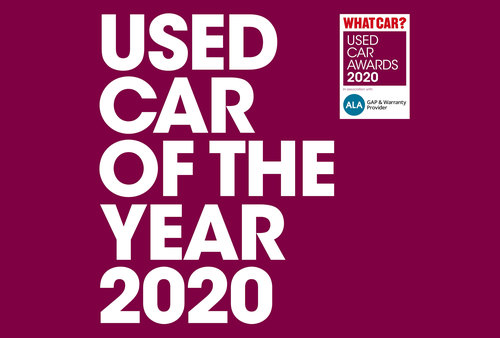 ●Audi A3 Sportback (2013 – present) awarded What Car? Used Car of the Year Award, beating a host of rivals for the coveted title

●Kia, Volkswagen and Volvo among the other manufacturers winning in multiple categories

●The 2020 Used Car of the Year Awards also included winners in a variety of price points, to better reflect the variety of used cars available for different budgets

●Awards held in association with GAP insurance and warranty provider ALA

●To find out more about our winners, visit https://www.whatcar.com/used-car-awards/


The Audi A3 Sportback has been named Britain’s best used buy, winning the coveted What
Car? Used Car of the Year Award for 2020.

The current generation of Audi A3 Sportback was first launched in 2013, and took home the
What Car? Car of the Year Award in the same year. It beat a host of leading models for this year’s overall Used Car of the Year title, including the Volkswagen Passat, Ford Galaxy and Kia Sportage.

What Car? judges praised the Audi A3 Sportback for its stylish and spacious interior, and its top-notch infotainment system. Combined with a strong line-up of efficient petrol and diesel engines, and an excellent reliability record, the A3 Sportback won the Used Family Car of the Year Award first, and then trumped all of the other category winners for the overall title.

To reflect the growing used market for electric and hybrid vehicles, What Car? introduced two new categories to this year’s awards: the Used Hybrid Car of the Year and the Used Electric Car of the Year. The Volvo XC90 T8 (2015 – present) took the former crown and the Renault Zoe (2013 – present) the latter.

Mark Pearson, used cars editor at What Car?, said: “We’re delighted to give the Renault Zoe our Used Electric Car of the Year award this year. It’s a car that’s always impressed us for its practicality and ease of use and, with plenty of used examples available for temptingly low prices, it truly brings zero-emissions motoring within reach of the majority of buyers. Later models have ramped up the real-world range, too, making the Zoe an even better everyday proposition.”

The 17 What Car? Used Car of the Year categories were divided into price points to better reflect the range of cars available on the used car market. The final decision on winners was taken by a panel of experts who considered all-round ability, value and the availability of desirable versions. In addition, DS was named the winner of the Used Car Scheme Award, for its outstanding 24-month warranty on cars up to four years old, which eclipsed rival offerings.

Pearson added: “Picking just one car from such a large and competitive field was a major feat, with so many excellent rivals offering great value for money. In the end, though, the Audi A3 Sportback won because it combines all the qualities we were looking for in its particular class, while still offering outstanding value for money at its age and price point.

“What Car? has always rated the A3 Sportback highly; it’s won our new Family Car of the Year Award multiple times and even took our coveted overall Car of the Year gong when it was launched in 2013. And although this model is now nearing the end of its production cycle we think it’s just as impressive today as it was back then.

“It’s great to drive, for starters, and it comes with a classy interior that few rivals can get close to. It rides and handles superbly, too, and it’s wonderfully refined and comfortable to spend time in – its interior is both spacious and well equipped. It’s also far more desirable than any family hatchback has a right to be, and it comes with a class-leading infotainment system. Finally, you get a great range of engines to choose from, whether you’re after an economical diesel or a punchy petrol. It’s a fantastic car as well as a terrific used buy, and a thoroughly deserving winner.”

What Car?, the UK’s leading and most trusted car buying brand, has the magazine, a
market-leading website and several established brand extensions. It has helped Britain’s car
buyers to make purchasing decisions for more than 40 years and its tests are widely
regarded as the most trusted source of new and used car advice.

Whatcar.com is the UK’s leading car buying website, offering trusted reviews and data on
every new car. A winner of numerous awards and accolades, whatcar.com is recognised as
one of the UK’s leading consumer websites and attracts 1.7m unique users every month and
over 13m monthly page impressions. The brand has seen major investment in its digital
infrastructure as it develops a new ecommerce platform, allowing users to act on the trusted
advice What Car? offers.

With a print circulation of 55,459, combined with its mobile and social reach, What Car? has
more than 5.5 million monthly points of contact with its audience on the move, at work, at
home and at the crucial point of sale. It is the top performing monthly on the UK newsstand
in the motoring category.

What Car? is committed to providing the very best used car advice that British motoring
journalism has to offer and to covering used cars just as thoroughly as new cars. What
Car?’s used cars section includes reviews, long-term tests, group tests, and online
valuations to help buyers in the used market find the very best car for their needs and budget.

The Used Car Awards are a reflection of the vast and varied used car market, covering
nearly new cars as well as older models that might have more relevance to buyers on a
budget.

What Car? modelled its Used Car Awards on its long-standing Car of the Year Awards for
new cars, which are widely acknowledged as being the most prestigious in the industry. In
addition to awarding a special accolade for the best approved used car scheme, judging took place across 17 different classes of car, from city cars to luxury SUVs, via estates, coupés, electric and hybrid cars and others.

What Car?’s Used Car of the Year award winners were categorised by three different price
points in each class of car. This allowed the judges to work out which models really offered the best value – and which looked too expensive – given what they actually offered to
the buyer.

Some cars fit into more than one price band, of course, with some appearing across two, or
perhaps even all three, of them. In these instances, the What Car? judges selected the price
group in which they felt the car was best served; either one in which it offered the best range
of engines, benefitted from a facelift which brought new technology or extra equipment, or
simply seemed like the best value. Cars aged five years or under were eligible for the
awards.

Using this methodology, What Car? was able to order the vast array of prices and models
available and could then judge each car on its own merits, as well as by comparison with its
rivals. Once victors in each price band within a particular class were chosen, the three
finalists were pitted against each other for the overall category award. The judgement was
made as to which of the three cars then offered the best overall value, taking into account
their age, reliability, likely mileages and condition and availability, and whether the pricier cars were worth the extra cost for any extra technology and advances they offered – or whether the lower priced cars were good enough to overcome the fact that they might not be at the cutting edge.

The decision-making process took two days, during which the latest used values were
ascertained from classifieds, and decisions drawn from What Car?’s extensive road testing
experience. The expert panel debated the relative merits of hundreds of different models in
order to work out which was the best in each class.

In judging used cars, What Car? examined the quality of cars available for a certain cost; because used cars are limited in number, rather than available to order, a car’s ubiquity was also factored in. If there are more examples around, the chances of finding a good one locally are greater, so ubiquity is a positive characteristic in a used car.

What Car? also examined the availability of good examples of a specific model. If there were
vast numbers of a particular car around at a good price, but they were all undesirable high-
mileage, low-spec models, What Car? looked at the cost of more appealing versions. These
picks of the range will have comprehensive specifications with an average mileage for the
year and a full service history. If a car was still competitively priced on this basis, only then
was it deemed to be good value.

A heavy emphasis was placed on a car’s reliability in the judging process, which is based on
What Car?’s own Reliability Survey, the latest results of which can be found at