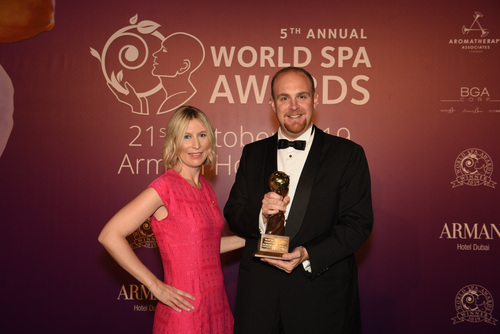 The eponymous The Merchant of Venice SPA, located at San Clemente Palace Kempinski hotel in Venice, has been named Best Hotel Spa in Italy, and Best Hotel Spa in Europe. The double award win was announced at the World Spa Awards 2019, at a prestigious ceremony held at Armani Hotel Dubai in the world-famous Burj Khalifa, attended by an audience of international representatives from the hospitality industry, including some of the most important luxury hotels in the world, as well as institutional representatives including the Dubai Tourism Minister.

The annual World Spa Awards is an international, industry-recognised competition, with nominated spas selected by an expert jury of discerning professionals, categorised according to country and type of spa, with the final vote cast by the public. The Merchant of Venice won the award for Best Hotel Spa in Italy.

From these award-winning spas, votes were cast to determine the best spa in each continent. The Merchant of Venice won the award for Best Hotel Spa in Europe. This award is an extraordinary recognition that gives even more value to this luxury Venetian brand.

Marco Vidal, CEO of The Merchant of Venice, said of the double win: “This is a very important recognition obtained just three years after the opening of our first SPA designed as an experiential space where we recreate, through our exclusive treatments, the atmosphere of an ever-new olfactory and emotional journey. It is thanks to the fruitful collaboration with the San Clemente Palace Kempinski of Venice that we have succeeded together in realising this project and winning the awards as the Best Hotel Spa in Italy and in Europe.”

Selim Uyar, owner of San Clemente Palace Kempinski and president of Permak Investments SRL, was also greatly delighted by the win: “We are proud to have won both awards. Since we own one of the most beautiful properties in Europe, San Clemente Palace Kempinski is the place where art and history meets in the heart of the ultimate luxury. The Merchant of Venice Spa is an oasis of luxurious indulgence, where The Merchant of Venice’s fragrant and refined essences blend with San Clemente's European flair and centuries-old tradition of remarkable service.”

Venice can now rightly be considered an international destination of excellence in wellness, thanks to the innovative concept of the experiential SPA created by The Merchant of Venice in collaboration with the San Clemente Palace Kempinski.

The double award win not only represents a great goal but also marks a starting point for future SPA projects for The Merchant of Venice. In 2020, the brand will launch a new and exclusive Magnificent Skin Care line. There are also new collaborations planned that could lead to other international openings of The Merchant of Venice SPA.

NOTES TO EDITORS – ABOUT THE MERCHANT OF VENICE SPA

The Merchant of Venice SPA offers treatments and massages with oils created by luxury fragrance house The Merchant of Venice, catering to the increased demand as a result of intelligent tourism, looking for authentic and original experiences and connections with local crafts.

The formula of oils is based on ancient Oriental recipes imported over the centuries to Venice by its merchants. Essential oils such as sandalwood, jojoba and bergamot, combined with room fragrances inspired by aromatherapy, invite one to enjoy a true "sensory journey between Venice and the Orient," by generating a deep feeling of relaxation and regeneration of both body and mind.

The elegant SPA covers two floors of a building adjacent to the hotel, reopened in 2016 by Kempinski, a historic brand of luxury accommodation. In its 380 square metres, the SPA includes a moisturising area – Finnish Sauna, Turkish Bath, and Emotive Showers - a relaxing lounge, a wellness area and four treatment rooms.

In the SPA Suite, guests are able to indulge themselves in a pure luxury experience. It is a haven for two people, intimate and exclusive, entirely dedicated to regenerating both mind and body. A large map of the Venetian Mude enables guests to imagine their souls and senses are journeying along ancient Venetian sea-routes. The Journey To Cyprus treatment (for two) uses the relaxing and toning properties of the noble Mocenigo Rose, an ancient species imported from central China to Venice and "rediscovered" anew by The Merchant of Venice. The massage for two, incorporating the essential oil of this rose, is anticipated by a romantic bath enriched by its petals.

Each treatment is thoroughly studied to guide body and mind to the discovery of the Venetian perfumery tradition. The Aromatherapy Massage, based on exclusive essential oils that revive the vitality of the body, and the Rosa Mocenigo Massage, fascinating with its rare and noble notes, are just two of the many body treatments that regenerate both physical and mental well-being.

The sandal essential oil, known for centuries for its anti-stress action, is the main ingredient in the re-equilibration treatment of La Rotta di Marco Polo. Bergamot, also called the Gold of Italy, given its calming and relaxing properties, is used for a water-reduction massage. An ancient recipe book of cosmetic secrets inspires The Secrets of Isabella Cortese treatment; due to the properties of lavender essential oil, this treatment helps to reduce stress and harmonise the body.

Another unique treatment is the 24-carat Gold Leaf Face Treatment. Since antiquity, gold has been the symbol of beauty: it was applied to the skin to make it glow. Recent studies have demonstrated the exceptional anti-ageing properties of gold, which generate brightness, smoothes out wrinkles, and attenuates dark circles.

The innovative and luxurious full-body treatment, Splendor Antiage by The Merchant of Venice, is based on eleven 24K gold leaves, applied to the skin along with two pre- and post-treatment serums based on vitamin E. For the development of this line, The Merchant of Venice collaborated with the Venetian artisan laboratory, Mario Berta Battiloro, the only one left in Europe able to manually transform gold into very thin leaves, which are suitable for various uses. The manual processing of the metal retains unchanged its rich properties, giving it a unique pureness that industrial processing is unable to achieve.

The Natura Bissé face and body treatments complete the richness on offer at the SPA.

Opening: the SPA is available for all guests of the San Clemente Palace Kempinski but also for external guests through Daily SPA proposals.

Winter Closure: the San Clemente Palace Kempinski resort in Venice observes a winter closure from mid-November to the beginning of March, which also includes the SPA.

The Merchant of Venice SPA is integrated into the San Clemente Palace Kempinski, which offers sport and wellness experiences that are unique in Venice. The century-old park on the island of San Clemente houses one of the few heated outdoor swimming pools in Venice, a golf course, and a tennis court, plus a 1.5km jogging trail with a unique view of the lagoon. The lush gardens are the ideal frame for the various yoga exercises taught by experienced trainers. In Summer, the Summerhouse Experience combines the benefits of The Merchant of Venice SPA treatments with the harmonious atmosphere of nature, generating moments of total abandonment for the mind and regenerative pleasures for the body.

The Merchant of Venice SPA, through its expert and experienced staff, is able to accommodate and satisfy the wishes of the resort's guests as well as those of visiting guests (who can also enjoy the services on the island through their San Clemente Palace Kempinski VIP Membership Card).

The Merchant of Venice is a brand of cultural luxury perfumery and represents the art of Venetian Perfumery, a tradition dating back to the centuries when the Serenissima Republic became the trade centre between the East and the West. The market of Venice traded the rarest and most noble raw materials, from which were created magnificent perfumes. The raw materials were imported to Venice through a system of commercial routes, called Mude, of which Venice had the almost absolute monopoly over the centuries.

In the city there were highly skilled perfumers, called Muschieri, who created magnificent perfumes and cosmetics that were sold at a very high price throughout the major European Courts.

The Merchant of Venice is the heir to this tradition and has interpreted it through a contemporary and international project, which enabled this brand, after only 3 years from its creation, to be launched in more than 30 countries and showcased in the world's premier department stores.

The San Clemente Palace Kempinski resort is a member of the Leading Hotels of the World consortium. It is located on a private island in the heart of the Venetian Lagoon, just a ten-minute boat ride from St. Mark's Square. Nestled in a centenary park grandly featuring the historic church of San Clemente - reminiscent of the monastery that was housed on the island for centuries - the five-star luxury Venetian hotel includes 190 rooms, 61 of which are suites, all with a view of the lagoon, historic courtyards, and lush gardens. With its three restaurants and three bars, a spa and fitness room, an outdoor swimming pool, a golf court, and a tennis court, the San Clemente Palace Kempinski is the perfect retreat after a day spent in the city of Venice. The independent conference centre with six meeting rooms, a large green outdoor space, and a variety of unique interior spaces, make San Clemente Island the ideal location for events and weddings. The award-winning hotel (Europe's Leading Luxury Wedding Resort 2019 by World Travel Awards; World's Leading Palace Hotel 2018 by World Travel Awards; Condè Nast Traveler's Readers' Choice Award 2018: #1 Hotel in Venice) today also includes The Merchant of Venice SPA, which has received the most important recognition at national and international level at the World Spa Awards 2019.