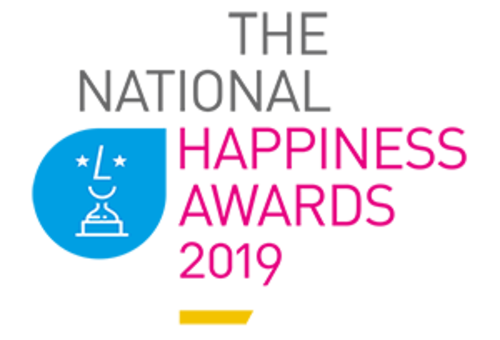 A brave five-year-old who suffered a life-changing stroke after playing at a branch of Wacky Warehouse has been crowned Britain’s Happiest Child.

Freya Watson, from Hedon near Hull, won the title at the National Happiness Awards, held on Friday night in London. She amazed her carers and specialist teachers at the unit where she was treated with her positivity and sense of humour, despite the challenges she faced.

Freya suffered a stroke and seizure caused by a burst aneurysm in September this year. Specialists at Leeds Children’s Hospital where she was treated had never seen the condition in a child. She had major surgery before beginning the long road to recovery and has worked hard and laughed during lessons on the brain injury unit where she was treated. She was described by her specialist teacher as `truly the most inspiring pupil I have ever worked with over my ten years of teaching’.

Other happiness heroes honoured at the annual event include Longwood Primary Academy and Nursey which won the Happiest Primary School category. Four years ago, the school was in special measures with 20 times the national rate of exclusions. It is now ranked as good, with outstanding features by Ofsted thanks to the introduction of a range of eye-catching mental health and wellbeing initiatives, including a meditation pod for pupils and staff.

The school in Harlow which was in crisis with only 20% of teaching staff on contract. With a change of leadership, management prioritised wellbeing and good mental health. Pupils were nurtured with the help of mental health charity Place2Be. The school launched the 50 Things at Longwood initiative, providing pupils with an extensive list of character-defining and memorable childhood experiences. Improvements since have been remarkable.

The National Happiness Awards honour happiness in education and business and are judged by an independent panel of experts. They are backed by learning and development company Laughology. The awards have developed a reputation as the nation’s brightest and boldest award scheme. Around 250 organisations and individuals entered this year.

National Happiness Awards founder and Laughology CEO Stephanie Davies said: “The National Happiness Awards are the Oscars of the wellbeing world and the people and places we honour are real heroes who make a huge difference to lives. We had some amazing finalists and it is truly encouraging to see so many organisations, leaders and individuals taking happiness seriously. At a time when there is so much uncertainty in the country, it has been refreshing to see so much positivity.”

The awards are sponsored by Twinkl and Crown House Publishing.

Awards judge and Twinkl Chief Customer Officer, Leon Smith, said: "Schools, individuals and businesses do things each day to make people happy and it's something that we should take more time to celebrate. It's so positive that happiness and wellbeing are becoming an increasing focus in education and beyond. I hope people will be inspired by all the incredible winners and nominees to recognise someone who makes them happy and give them a big thank you too."