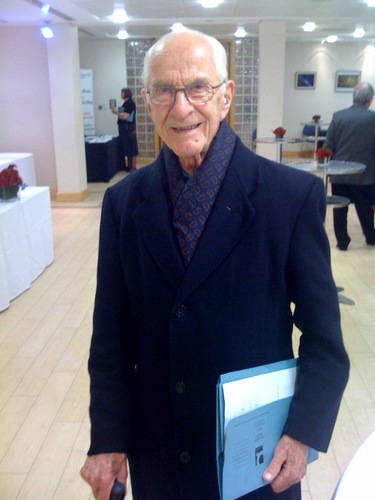 Dr Alfred William Frankland, the “grandfather” of clinical allergy in the UK, has died at the age of 108. Bill as he was fondly known as was respected world-wide for his contributions to allergy and particularly for his pioneering work on allergen specific immunotherapy which improved the quality of life of patients with severe hay fever and other allergic diseases.

His distinguished career in allergy began after World War 2 when he returned to work at St Mary’s Hospital, London, having survived as a prisoner of the Japanese.

He worked as a Clinical Assistant to Sir Alexander Fleming and enjoyed a good working relationship with him, however they disagreed over the prospect of penicillin allergy when the drug was first introduced and Bill was correct in stating that allergy to penicillin was likely to occur.

Bill ran the immunotherapy clinic at St Mary’s Hospital, giving desensitizing injections to thousands of patients. He undertook the first scientific trial of grass pollen injections for hay fever- to show how effective they are. He also demonstrated that immunization with bacteria did not prevent asthma exacerbations

On Dr Frankland’s recommendations, St Mary’s Hospital employed a botanist allowing pollen counts to be recorded from the roof. From 1963 these have been sent to the media and as a result we still see the pollen count being included in weather forecasts today.

Professor Adam Fox, President of the British Society for Allergy & Clinical Immunology (BSACI) of which Bill was President from 1963-1966 said’ “Bill is the ‘grandfather’ of our speciality and has been a great friend to many of us as well as an enormous inspiration to many more. He achieved so much in both his professional and personal life and is going to be greatly missed by us all for so many reasons.”

Dr Frankland’s many achievements and contributions to allergy over the past 70 years have been extensively documented in the media both in the UK and worldwide. He has received many honours over his lifetime the highest one was in 2015 when he was recognised in the Queen’s Birthday honours list and awarded an MBE by HRH The Duke of Cambridge.

The allergy unit at St Mary’s Hospital was named after him and in recognition of his accomplishments, BSACI named an award in his honour ‘The William Frankland Award’ which has been presented each year at the BSACI Annual Meeting since 1999 to those who have provided outstanding services to clinical allergy in the UK.

Rarely can a single figure have been so influential in an institution and the fostering of a clinical discipline to the extent that Bill Frankland has. He was a legend in his own lifetime and many allergists of several generations have benefitted greatly from his wisdom and experience. He will be sadly missed by the whole allergy community.

The British Society for Allergy & Clinical Immunology (BSACI) is the national, professional and academic society that represents the specialty of allergy at all levels. Its aim is to improve the management of allergies and related diseases of the immune system in the United Kingdom, through education, training and research.
BSACI have set up a website for people to send in tributes
BSACI Website
Dr Franklands obituary
For further information please contact: Fiona Rayner on 07814 876577 or info@bsaci.org