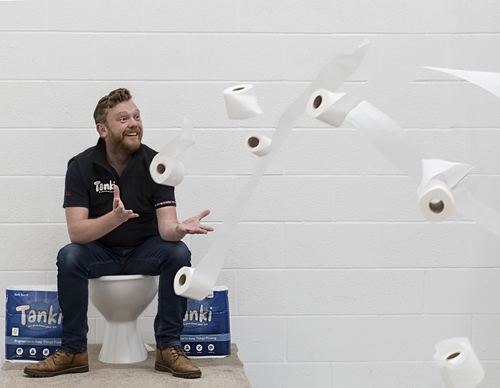 An environmentally friendly toilet paper business rolled out since lockdown hit is set for £1 million of sales in its first year.

Award-winning Tanki, of Shrewsbury, Shropshire, is both glue and plastic-free and as well as for household use, is also aimed at the maritime and leisure market.

Founder Matt O'Crowley, 37, is a former deck officer with the Merchant Navy and switched careers as the pandemic took hold after discovering he was ineligible for furlough cash.

He said he turned to toilet paper because everyone needs it and there was a gap in the market for a brand that doesn’t clog up the world’s sewerage systems or seas with material harmful to marine life. With more than 1,000 direct customers, sales have already come from Spain, Greece and Singapore as well as the biggest supplier to UK caravan parks, Nova Leisure.

Matt, who was joined in the early days by business partner Mark Collins, said: "One day my loo blocked, and I suddenly remembered all the places in the world where a paper bin sits next to the lavatory due to the sewerage systems not being able to cope.

"This led to thoughts about how the same problem exists on ships, yachts, caravans and houses with wonky plumbing that might be connected to septic tanks and sewerage treatment systems. Everything at that point pointed to smelly old tanks and Tanki was born.”

The paper can be safely flushed into the Arctic as it is designed to comply with maritime pollution regulations.

Backed by £20,000 in funding from a start-up loan via the 'Biz Britain' scheme and private investment, Tanki (http://www.tanki.co.uk) has gone from strength to strength.

It scooped a 'Maritime UK Innovation Award', within months of being born, and received major support from broadcasting giant ITV in a major ad campaign.

With business advisors predicting a £1 million turnover in year one, Tanki has turned down venture capitalists wanting shares and Matt has been inspiring other wannabe business owners with his straight-talking tips.

He added: “Life on-board ship is permanently dogged by the misery of blocked sewage systems. Not only are these blockages due in no small part to the glue in toilet paper, but when conventional paper does flush through, it is sending plastic directly into the ocean. Being made redundant due to Covid gave us the opportunity and impetus to do something about this.

Off grid homes are now increasingly using the same technology as cruise ships to handle their waste, meaning that the same issues exist in the countryside, as at sea.

“It may come as a surprise that the humble loo roll contains a lot more than just two or three sheets of very thin, biodegradable paper. Typically, every roll of two ply toilet paper contains 2.7g of lamination adhesive and softening agents that bond the sheets together.

“It is not currently practical to prohibit users from flushing paper down the toilet, in the same way that some countries and cities have done, but these glues and nano-plastics cannot be filtered out and treated effectively in a sewage treatment plant. Adhesives are the main cause of toilet tissue clogging up pipes, forming a slow-moving sludge, leading to blocked pipework and drains and damage to treatment systems."

Tanki is created using virgin pulp, a by-product of timber grown for housing, from verified sustainable and actively managed sources. Its supply chain and manufacturing facility is both BRC Grade A rated and recognised by the FSC.

Matt says that the success of Tanki so far has been exhilarating.

He said: “I’m proud we have been able to create and sustain an international business during the most challenging pandemic of the modern western world.

“Starting a business is normally a frantic round of face-to-face networking, but that has not been a possibility for us-everything has been done remotely, which has meant putting huge amounts of trust in people and other businesses. Luckily for us, all of them have shown us enormous kindness and support.

“The business has evolved exactly as planned, and is about to exceed all expectations as new markets keep opening up for the product.

“Now, the intention is to have Tanki in every boat, caravan, farmhouse and off grid home in the UK.”