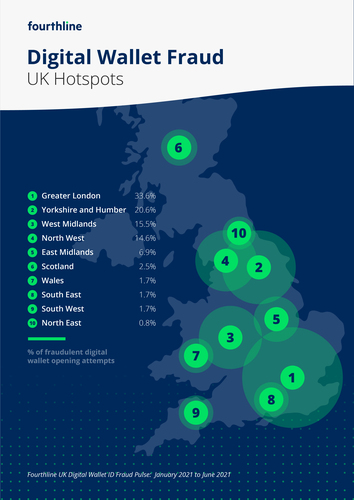 Greater London is the hotspot for counterfeit ID fraud attempts

Amsterdam, Holland, 28 June 2021: Fourthline, the digital identity and verification specialist, has released findings from its Digital Identity Fraud Analysis Tool, which looked specifically at the different ways fraudsters have attempted to create digital wallet accounts in the UK over the last six months. The UK Digital Wallet ID Fraud Pulse, analysed data over the period January 2021 to June 2021, to reveal criminals most commonly used counterfeit driving licences when attempting to open a new digital wallet account.

Digital or mobile wallet payments have skyrocketed in the UK - used for just under a third of all online transactions in 2020, according to payment processor Worldpay. This explosion in usage presents an opportunity for fraudsters to use counterfeit or tampered ID to create illegal digital wallet accounts. As the real identity behind these fraudulent accounts is unknown, the accounts can be used to launder money; for bribery purposes, wider scams and tax evasion; as well as making purchases and transferring money.

Driving licenses are the most common counterfeited identity document used to open a fraudulent digital wallet in the UK (55.2% of all fraud attempts)

This is followed by a passport and non-UK national ID cards (both 18.4%) and residence permit (7.8%)

Greater London is the counterfeit ID hotspot for digital wallet opening attempts in the UK: 33.6% of all fraud attempts were recorded in Greater London, followed by 20.6% in Yorkshire and Humber.

The West Midlands experienced the next highest amount of fraudulent digital wallet openings (15.5%), followed by the North West (14.6%) and East Midlands (6.9%).

Meanwhile Scotland (2.5%), Wales, the South East and South West (all 1.7%) and North East (0.8%) have the lowest amount of fraudulent digital wallet opening attempts.

According to UK Finance, the proportion of people in the 65+ age group registered for mobile payments is lowest with just under 5%.

Krik Gunning, Co-founder and CEO of Fourthline comments: “The shift to storing our identity in digital wallets brings greater convenience and control of our sensitive personal data. Yet fraudsters are pushing to exploit the freedoms digital wallets provide. Providing the highest levels of security and compliance at account sign up is crucial to pinpointing digital wallet fraud and preventing fraudulent account openings.”

METHODOLOGY
The figures are based on an analysis of Fourthline’s data of over 20,000 digital wallet account openings in the UK. The data consists of applicants with a residence address in the UK over the period January 2021 to June 2021. UK regions are derived from postal codes.

Definition of Document fraud: the use of inauthentic government-issued IDs. These can either be counterfeit, where the entire document is fake, or tampered documents, where only certain details of legitimate ID documents have been altered. This can include the substitution of photos, printed and cut copies of genuine documents, altered information on genuine documents (i.e. expiration dates or birth dates) and entirely forged documents made from scratch.
### ENDS ###

About Fourthline
Regulated enterprises around the world trust Fourthline to authenticate and verify the identifies of thousands of new customers every day. Founded in 2017, Fourthline is one of Europe's fastest growing fintech companies for digital identity and verification. It screens millions of customers every year for companies such as Vivid Money, Trade Republic, Solarisbank, flatexDEGIRO, and N26. Fourthline is an FCA licensed payment institution and is also licensed by the DNB with full EU passporting rights. For more information, please visit https://fourthline.com/