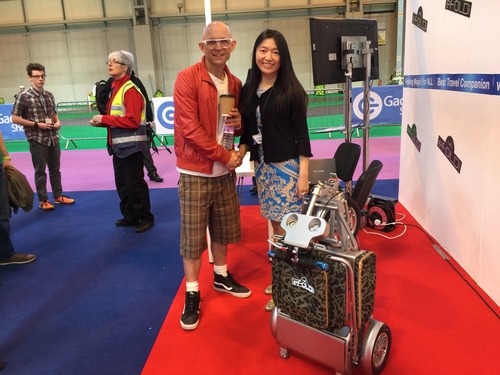 eFOLDi is extremely versatile and can be easily folded up, used as a seat or put into scooter mode

Sumi Wang said, “We are over the moon to win the British Inventors’ Project at Gadget Show Live. I must thank everyone involved in the project and Gadget Show Live. The other 19 inventions on show are fantastic, so this makes me feel very proud.

In addition to winning the prize, Sumi also took the opportunity to launch the first Kickstarter campaign, which took place live at the event and was launched by Jason Bradbury and David McClelland, to raise investment for eFOLDi. Footage of the Kickstarter launch can be found here.

The goal is to raise £90,000, with which Sumi can get the first production run of eFOLDi under way. There is a range of different pledge values and rewards available, from £1 to £4,799, with eFOLDi itself starting at £699. Almost £32,000 has been pledged already.

"eFOLDi is extremely versatile and can be easily folded up, used as a seat or put into scooter mode. It also appeals to a wide range of people: commuters, those with limited mobility, festival goers and outdoor enthusiasts.

Sumi Wang recently won the grand prize of £5,000 at Surrey Entrepreneur Academy 2015, an event organised by Reigate and Banstead Borough Council in partnership with East Surrey College. The money was awarded to allow Sumi to gain an international patent for eFOLDi.

Images and high-resolution video footage are available on request.