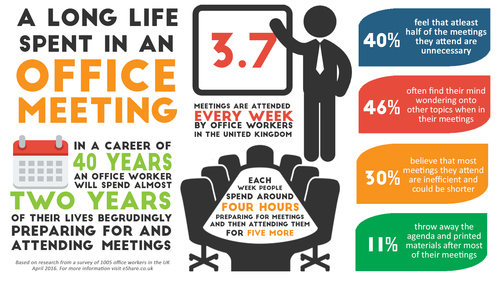 Other areas of business have been brought up-to-date in terms of attitudes and technology, and it is high time that meetings did the same.

April 26, 2016 - Office workers in the UK are spending increasing amounts of time preparing for, and attending meetings – around 25% of their working week - according to new research from eShare.

The survey of 1,005 office workers revealed that the average worker attends 3.7 meetings every week, spending one hour nine minutes preparing for each meeting and one hour 22 minutes actually attending it. In any given working week, this means that office workers are spending more than a day preparing for, and attending meetings. Across a 40 year career, this equates to a total of 17,470 hours - two entire years of someone’s life or around 10 years of work time.

“Meetings are an integral part of business life, but many are inefficient, with incorrect agendas and attendees unable to locate the required background information when they need it,” said Alister Esam, CEO, eShare. “With the average office worker spending more than a day every week on meetings, addressing the waste of hours resulting from ineffective and inefficient meetings could be the single biggest boost to productivity for any organisation.”

eShare recently launched MeetingSquared, a new app for anyone who organises or attends meetings, and looks to bring an end to the inefficient preparation, scheduling and management of meetings. The research found that 40% of office workers feel that at least half of the meetings they attend are unnecessary, while 30% believe that most meetings they attend are inefficient and could be much shorter.

“With many office workers stating that most meetings they attend are inefficient and could be shorter, it is clear that the entire meeting process needs to be addressed,” continued Alister Esam. “Whether it is a large corporate or an SME, too much valuable resource is being wasted in inefficient meetings, which could be better spent elsewhere. Changing this will entail a collective focus on the approach to meetings across the business world, but smaller steps can be taken such as using the appropriate digital tools for meetings instead of traditional paper-based approaches.”

The research revealed that many office workers (one in five) still attend meetings with agendas and supporting materials printed out on paper, but also that there is a worrying lack of diligence when the meeting is finished. 11% of research respondents admitted that after most meetings they just throw away the agenda and printed materials, which has a number of security implications.

Almost half of respondents (45.7%) said they often find their mind wondering onto other topics when in meetings, further highlighting the fact that meetings need to be more focused and goal-orientated.

“Anyone attending a meeting must have the relevant emails, documents and agenda available on their device, and be able to annotate and share those with ease,” concluded Alister Esam. “Furthermore, actions should be agreed and recorded so you don’t have to rely on an attendee’s faulty memory to refer to what was discussed. Other areas of business have been brought up-to-date in terms of attitudes and technology, and it is high time that meetings did the same.”

An online survey of 1,005 office workers was undertaken by TLF Research in April 2016. Data was extrapolated in the following way:

• Each week, people spend on average five hours three minutes in meetings and four hours 15 minutes preparing for them.
• In a career of 40 years, working 47 weeks per year, the average office worker will spend almost two years of their lives preparing for (47 weeks, 3.85 days) and attending (one year, four weeks and 1.2 days) meetings
• Someone in a 40 year career, working 47 weeks a year on a 37 hour week, will work a total of 69,560 hours. 17, 470 hours of this will be spent in meetings or preparing for them.