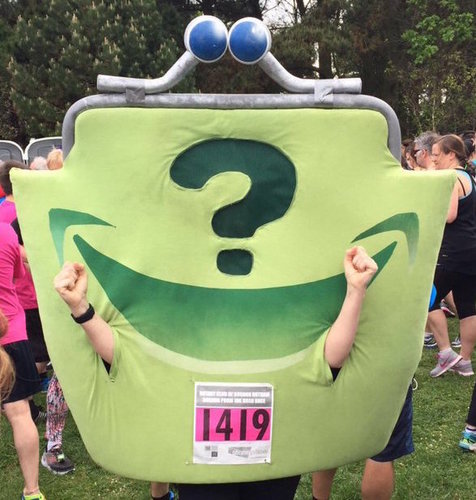 By doing so, Ali raised £1176.66 for the Alzheimer’s Society from family, friends, colleagues and customers, which Michael Ward, Managing Director at PayingTooMuch.com, personally doubled to £2,353.32.

Running dressed as a giant purse certainly posed some problems for Ali. Firstly, the costume is not particularly streamlined, leaving Ali battling the notorious sea breeze along Bognor prom.

The second problem was practice; Ali was seen running in costume at 6am in her local neighbourhood, providing quite a shock for weary eyed commuters.

Ali bravely put her body on the line for the worthwhile cause. She did unfortunately get a ‘sore grazed nose’ after leaning on the netting during the in-to-wind running segment in the second half of the race.

Speaking after the race, Ali commented: “I did it! It's not something I'd like to repeat but am so pleased to have raised all that money for such a great cause. I'd like to thank everyone who came down and cheered me on - the reaction I got was brilliant.”

Ali chose the Alzheimer's Society as 66% of our client base are over the age of 60. PayingTooMuch.com is always delighted to help them get excellent value travel insurance, both online and via our Chichester-based customer service team, allowing them to travel when other companies’ prices are prohibitive. Ali hopes that the Alzheimer's Society will be close to many of our customers' hearts too, many of whom live in the local area.