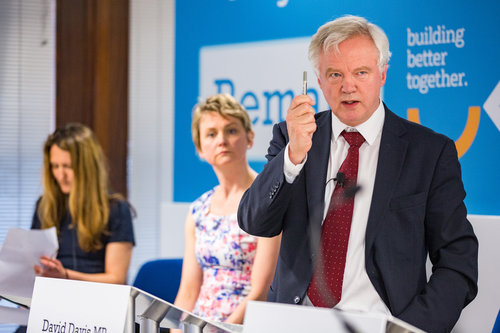 It is just two months since a heated debate took place at the Coventry University London Campus, at which David Davis MP spoke, when SME business leaders heard the debate for both the remain and leave camps. Speakers for the debate also included Yvette Cooper MP, Lucy Thomas and Douglas Carswell MP. David Davis has been chosen by the new Prime Minster Theresa May to lead the UK’ negotiations for Brexit.

Welcoming David Davis to his new role, James Abbott, President of the UK200Group and founder of accountancy firm Abbott Moore said, “Although we have no political bias as an organisation, we are fully engaged in the political debate and urged our members to discover the cases presented by both sides of the Brexit debate.

“We welcome David Davis to his new position, appreciating its significance. On behalf of our accountant and lawyer members – the trusted advisors to over 150,000 SMEs – we ask that he provides reassurance to business owners that financial and business confidence can be restored as quickly as possible.”

In the debate that took place on May 11 in the City of London, David Davis said, “Some time ago I was the Europe Minister for the last Conservative government and spent much of my time over nearly five years negotiating with the European Union. For the 20 years since then – including then – I have hoped against hope that we would see reform. But every time we look to reform, every time we try to decentralise its centralised, every time we tried to reduce how intrusive it was it became more intrusive, every reform has always done the reverse of what was intended.

“So what I want to see is control of my country back, and the primary reason is not initially about business. The primary reason is democracy; this unfortunately is an anti-democratic organisation. People as widespread as Jean-Claude Juncker down to Dimitris Avramopoulos – President down to Commissioner – have said, in effect, don’t listen to the voters When we make our policies we do not pay attention to the voters.

“Now that, you may think, may not matter in the view of a politician, but look at the consequence of that: that’s why we got the Greece tragedy, with a quarter of an economy destroyed, public services shattered, hospitals closed, doctors having to leave the country, infant mortality up, the hopes and aspirations of an entire generation - 60% of young Greeks - destroyed. Not just Greece, but Spain, Portugal, Italy, where last week there was a survey. In the home of Europe, where the Treaty of Rome was written, 48% of Italians say that if they had a referendum they would vote to leave today. It’s a destructive effect of having this oligarchic operation in place. Douglas (Carswell) has talked about the economy so I won’t stay with it very long, but I’ll say something quite questionable. For the first 20 years of our membership, the common market actually worked rather well, we were inside a tariff barrier and it delivered us much better exports by comparison with our non-European competitors.

“Since 1993, since the end of the Uruguay Round, since the reduction of tariff barriers, since the onset of the single market – which is really a unified regulatory zone - that has not been true. We have done worse rather than better than our competitors around the world. That’s why our exports to Europe have gone from 61%, when properly calculated, about a decade ago to 41% now. Emphasis has gone to the global market, that’s where our future is.
“We will hear that it’s impossible to do this negotiation. You’ve heard from the European Establishment - that’s La Garde, Lamy and our own Prime Minister (David Cameron) - that we can’t do a negotiation with them. I actually have negotiated for five years and this is all nonsense. You normally have this somewhat Latin hysteria at the beginning of the negotiations and eventually you get a deal. There are very, very strong reasons as to why the most important states in Europe will give us a deal as good as what we have today, but what’s more important is that it will open more free markets around the world.

“Even listening to Obama a couple of weeks ago, he clearly did not understand his own free trade negotiating process, because his country, is far from having a queue – or a line, as he would say in America. Eight negotiations have been completed inside three years. So there is plenty to win out there, there is a great economic future and at the same time we can improve our security. We’ve heard from lots of generals saying that we can’t, and a lot of other generals saying that we can. We’ve had heads of MI6 still on government payrolls say that we can’t and that Richard Dearlove, the greatest operational head of MI6 in modern times, say ‘Europe actually makes our security much worse’. So it’s a good future ahead of us. Yvette (Yvette Cooper MP) listed for you: NATO, the UN Security Council, leading Commonwealth member, G7 member. We owe none of those posts to being in the European Union; we owe them to our history and our success as a nation. We should grasp that and look to a global world.”

James Abbott added, “We look forward to further clarification and reassurance to business owners in due course.”

In order to assist SME owners who wanted clarity around the referendum debate the UK200Group asked key questions to both the remain and leave camps. The answers from the Leave campaign can be found in full in the report attached. Film of the May 11 event can be found here.