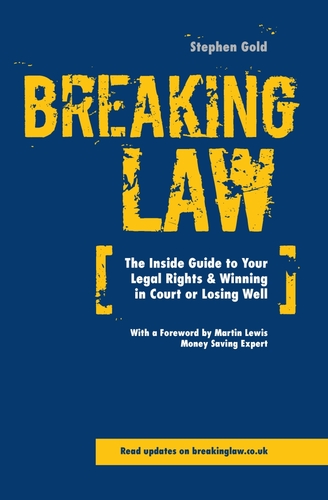 Quite apart from a prosecution, a misled customer can usually unravel the deal or claim a discount of 25 to 100% of the price paid

This warning is made by Stephen Gold, just retired as a judge and former lawyer to the Kray Twins, in his new book Breaking Law. He says that we are paying shops a fortune over the odds because of misleading pricing. On top of that, the decline of free plastic bags and the trend for not taking a receipt could lead to both more shoplifting and more false allegations that shoplifting has occurred.

Stephen relates his own experiences:

“In six separate recent incidents over a period of five months in one town, I – little sole me - was deceived or almost deceived on pricing by three separate high street supermarkets. That must translate into many millions each year overcharged for the whole country and all its shoppers. The main mischiefs seem to be failing to feed displayed discounts into checkout till computers and placing discount labels alongside goods to which they do not relate.”

Shops who mislead on pricing risk prosecution. They will only get off the hook where there has been a mistake or accident if they can show they acted with diligence and took all reasonable precautions to avoid what happened. Quite apart from a prosecution, a misled customer can usually unravel the deal or claim a discount of 25 to 100% of the price paid, depending on the seriousness of the seller’s transgression.

If you are not being deceived, you might be unwittingly suspected of shoplifting. With the demise of the free plastic bag and the increasing reluctance to offer receipts as contactless payment takes hold, customers' trollies could now be loaded with unbagged goods from other shops, for which they do not have a receipt, alongside items from the supermarket. Stephen contends that this could put both sides in difficulty.

“The shop may be unable to prove a theft when it has actually taken place and the customer may struggle, if challenged, to show they have paid or purchased the goods elsewhere. A customer could claim damages for false imprisonment if they are arrested against their will by a store detective and it transpires they have done nothing wrong.”

For those without a lawyer Stephen offers a host of template letters and court documents along with template pre-nuptial and cohabitation agreements, an agreement for pet sharing on the breakup of a relationship and a ‘no sex agreement’ for couples whose interest lies elsewhere.

The book also bulges with his numerous legal tips. Here’s a sample:

• If a bailiff exceeds his powers when seizing your goods and you suffer loss, you can make a claim.
• A shop which has sold you sub-standard goods cannot excuse refunding the price because you no longer have the receipt. Some other proof of purchase or just your word can be sufficient.
• The new right to reject sub-standard goods within 30 days of purchase can be extended by agreement. Make the seller agree to give you longer before agreeing to buy.
• Nearly 300,000 tenants are estimated to have paid deposits to their landlords which have not been protected as required by law. They could claim a refund plus a penalty of up to three times the amount of the deposit (even if the tenancy is over).
• If you can’t afford to hire a lawyer for the whole or any part of your case, there are other ways to get one. He explains what they are.
• If you win a civil court case which you dealt with yourself, you can ask that the loser be ordered to pay for your time which was taken up at the rate of GBP19 an hour plus court fees and money you may have paid out to lawyer for advice on the case (with different considerations on ‘small claims’).

Along the way, and in uniquely humorous terms, Stephen recounts many of his own consumer complaints and other litigation he has personally brought including how an unusual libel claim against the BBC, on which he acted on behalf of the imprisoned Kray Twins on the basis that their reputations had been injured, ended earlier than had been intended.

Stephen Gold has many years’ experience both as a recently retired civil and family judge and, before that, as a practising solicitor.

In numerous national and regional broadcasts and in articles, Stephen has brought the law to the general public and lawyers alike with a unique mix of practicality, straight language and humour. Among the programmes contributed to have been You and Yours, the Jimmy Young Programme, The One Show, Panorama, Top Gear, Pebble Mill at One, The Home Service and Radio 5’s Drivetime.

One of the pioneers of live legal advice phone-ins he has helped many hundreds over the airwaves on LBC and BBC Radio Solent as well as Richard and Judy.

While a judge, he was an accredited media spokesman for the judiciary and is a long standing columnist for the leading legal weekly New Law Journal. His columns have also appeared in House Beautiful and The Independent.

From the Foreword by Martin Lewis, Money Saving Expert

“What would a judge say? Never a bad question to ask before you undertake any form of legal action. And that’s the joy of this book - it reveals what someone who until very recently wore a wig, thinks and how he’d approach an enormous compendium of problems.”