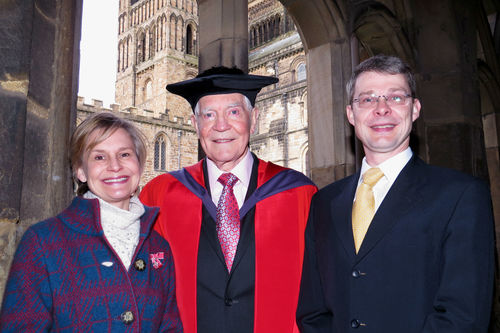 Isle of Man-based inventor and engineer Dr John C Taylor OBE, whose name may not be familiar to all but whose inventions are used by tens of millions of people across the globe every day, has been recognised by the highly prestigious Durham University for his contributions to science and business.

Dr Taylor made his name creating bi-metal components that are vital to many items in our cars and homes we couldn’t live without.

Early electric kettles would not turn off when the water was boiling, meaning that they needed constant supervision and were in danger of melting and starting fires if they were not properly attended. Dr Taylor created the solution to this problem: a small, bi-metallic thermostat which would break the kettle’s circuit when the water started to boil.

Dr Taylor has today (Thursday January 12) been awarded an honorary doctorate (DSci) by Durham University, at which he has been a Visiting Professor of Physics for a number of years, lecturing on topics such as his famous Corpus Chronophage clock in Cambridge, and telling an inventor, engineer and entrepreneur’s story to the students to enthuse them to also be creative.

“What makes it particularly special for me is that this is where my son Neil graduated with a First in Engineering in 1991.

“I’m looking forward to continuing to lecture at Durham, in particular offering the sort of practical advice that can help young engineers and inventors to turn a good idea into a viable business.

“The United Kingdom is known around the world for its innovation and I think it’s important to support the innovators of the future, who will help the community by creating jobs, money and opportunities for others.”

Professor Stuart Corbridge, Vice-Chancellor of Durham University, said, “Durham students benefit from education that is challenging, difficult, enabling, research-led and transformative, delivered in an environment of world-leading and world-changing research, as well as enjoying a wider student experience to rival the best in the world. This helps make our graduates among the most sought after in the world.

“I congratulate all of our graduates and wish them every success as they embark upon a new phase in their lives. Our honorary graduates are great innovators in their field and I am sure our students will draw inspiration from them.”

Dr Taylor now has over 400 patents to his name, and his retirement has not slowed him down. He is one of the UK’s leading experts on early English clocks and his most recent inventions reflect his love of horology. In 2008 the Corpus Chronophage was unveiled in an exterior wall of the Taylor Library at Corpus College, Cambridge.

The Corpus Chronophage is one of the few unique clocks in the world and its patented mechanics work like no clock before it. It has now become the most-visited tourist attraction in Cambridge.

Dr Taylor has been the recipient of many honours including, but not limited to, the following:
• Appointment as an Officer of the Order of the British Empire in the 2011 New Year honours list for his services to business and horology
• Appointment as a Fellow of the Royal Academy of Engineering for his outstanding contribution to the advancement of British engineering, innovation and commerce
• The Harrison Medal, awarded by the Worshipful Company of Clockmakers for excellence in horology
• Being conferred an Honorary Doctorate from University of Manchester Institute of Science and Technology (UMIST)
• Being conferred an Honorary Doctorate from Durham University