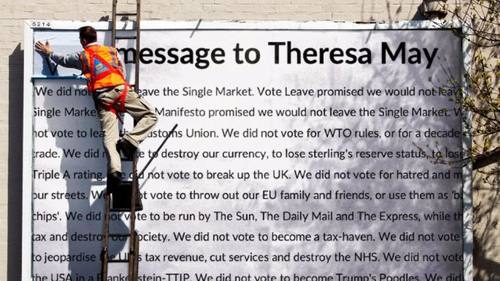 In less than one week, over 3,000 people have funded a people’s crowd-fund campaign that will give a voice to the silenced millions who do not support the government’s Brexit plans.

Having smashed their original GBP 25,000 target in under 12 hours, campaign founders, Remain Strategic, now expect to raise more than GBP 75,000 to deliver a strong message to parliament through national advertising ahead of the amendments to the Government’s Brexit bill, announced last week.

Martin Evans, whose Facebook post kick-started the project, garnering over 1500 likes in a few hours, said, “The amazing extent of support for the campaign reveals the level of dismay across the country amongst the ignored electorate at Theresa May’s increasingly heartless Brexit. This campaign will finally take their frustration out of their homes, pubs and internet groups, and into the spotlight, on the streets of the United Kingdom. If people feel silenced,” Mr Evans continued, “they should contribute to this campaign, use their voice, write to their MPs, and most importantly, stop accepting the myth that they are part of an irrelevant minority.”

“We are not the liberal elite. We are not the privileged few. We are the suppressed many. The ordinary people who did not vote for this. We are still here and we are not going away. We love our country and believe it deserves better than this” he added.

Liz Ferretti, spokesperson for Remain Strategic, said, “The number of households concerned about Brexit jumped by 20% in the last three months of 2016. Now price hikes are starting to bite, and the hardest hit are those least able to cope, with nearly 60% of households worried about food costs. Trebling inflation and the collapse in the value of sterling mean it’s only going to get worse. This is reality for the ordinary people of the United Kingdom who are scared by what they are hearing in the news every day. The Government is not listening,” she said, “and from the level of support for our campaign across social media, it is clear that our voices need to be heard.”

Ms Ferretti continued: “Since June the 23rd, the government has propagated the fantasies of a clear mandate and the will of the people to silence dissenters. Crowdfund backers largely perceive that the government is using these mantras as a smokescreen behind which to railroad the country into a Brexit more brutal than all but the most right-wing leave voters might have imagined.”

Sue Ellar of Represent Us highlighted, “Indicators point to the fact that the government’s current position is supported by 33% of the electorate at best and quite probably a lot less. This makes it even more crucial that the government provides further opportunities for the public to be consulted.”

The Liberal Democrat Shadow Secretary of State for Exiting the European Union, Nick Clegg “public appetite for this campaign clearly shows that the government cannot afford to continue alienating great swathes of the electorate”.

Ferretti emphasised the changing mood amongst backers: “The messages we receive today follow a singular theme. There’s a groundswell of frustration. People across the movement know that the numbers are in our favour, that we – the silenced, and the ignored – in fact today represent a majority. The people are aligning and mobilising themselves to ensure that they are silenced, and ignored no longer. This campaign represents the first big action on behalf of all those feeling helpless and overlooked, the start of a conversation that will continue for the foreseeable future.”

Grahame Pigney, of The Second People’s Challenge said, “People’s individual rights were absent from the debate about EU membership. These issues are important to ordinary people on a day-to-day basis,” Mr Pigney continued.
“It is possible for individuals to get their voices heard when they work together,” Mr Pigney added,”Crowdfunding demonstrates commitment and validates the need for people to have their say.”

Phil Geraghty, MD of Crowdfunder.co.uk, is impressed by the reaction to the fundraiser: "This billboard crowdfunding campaign is a great example of what can be achieved when people come together. Within four days, over 1800 people donated to get their voices heard via this prolific and far-reaching project, and now there are more than 3000 supporters which just goes to show the true power of the crowd."
END

NOTES FOR EDITORS
For all press enquiries contact info@remainstrategic.eu

Remain Strategic provides communications support for the Remain movement. In addition to in-house projects, such as our crowd funder, we work with partners across the movement, including Represent Us, The Second People’s Challenge, and Unite for Europe.

Remain Strategic – From the 48% to Theresa May – crowd funder
Campaign to give UK voters a voice in the national debate over Brexit.
http://www.crowdfunder.co.uk/fromthe48totheresamay

Represent Us
National Campaign for conditional notification on the terms of Brexit negotiations, giving Parliament a final say.
http://represent-us.uk

The Second People’s Challenge
A Crowd Justice-funded legal challenge, set up by the ‘People’s Challenge’, to ensure Parliament has meaningful control over the Brexit process.
www.crowdjustice.org/case/parliament-take-control