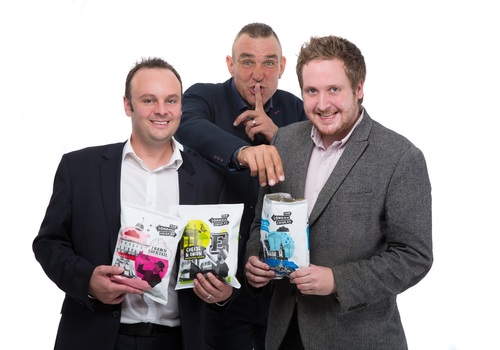 WATCH OUT GARY LINEKER….ANOTHER FORMER FOOTBALL STAR IS LOOKING TO TAKE A BITE OUT OF THE £1BN CRISP MARKET

Football hardman Vinnie Jones has joined forces with The London Crisp Company and has not only become their Global Brand Ambassador but is also the inspiration for their new Special Edition Salt & Vinnie-gar flavour.

Once known for his crunching tackles and his fearsome reputation as part of the 1988 FA Cup Winning “Crazy Gang” team at Wimbledon FC, as well as Captain of the Wales National Team, Vinnie is now helping The London Crisp Company crunch their way to a bigger share of the UK crisp market. Vinnie Jones has gone on to have a successful acting career, and is best known for his roles in the cult-classic film Lock Stock and Two Smoking Barrels.

As soon as Vinnie Jones - an avid crisp fan - tasted the London Crisp Company tantalising range of hand-cooked crisps and met with the Founder/MD Thomas Lock, Salt & Vinnie-gar just had to be the latest addition to the company’s London inspired snacks. And with the aptly named flavour, Vinnie Jones and Gary Lineker are set to re-ignite their - at times fiery - footballing rivalry, but this time by jostling for a share of the £1bn UK crisp market.

"Britain's best loved hard-man is the perfect inspiration for the London Crisp Company's classic flavour," says Tom Lock. "Our Salt & Vinnie-gar crisps are a no-nonsense flavour with a classic crunch, and Vinnie's links with London (he was born and raised in Watford, and had two playing spells with Wimbledon FC, and one with Queen’s Park Ranges), make him our ideal partner as we look to grow to expand internationally and become a major player in the UK Snack Market. As well as being the face of his very own flavour, he will also be appearing in advertising and promotional activities over the coming months.

Hand cooked in the heart of London from locally sourced potatoes, you’ll find The London Crisp Company’s snacks in selected branches of Tesco, ASDA and Waitrose – as well as the iconic Selfridges Food Hall, Fullers Pubs and Percy Ingle Bakeries.