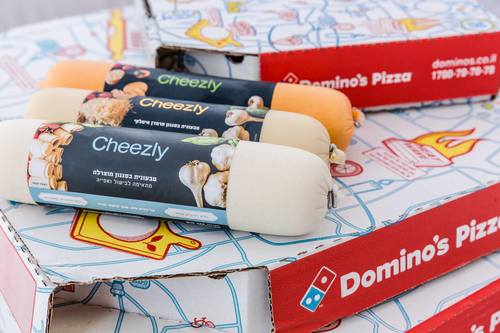 In focus groups and taste tests, VBites’ Cheezly was the variety most preferred by the vegan crowd

Domino’s Pizza has upgraded its vegan menu in Israel by switching to a dairy-free ‘cheese’ produced in the UK by award-winning ethical food firm VBites.

The pizza chain first introduced a vegan option to its Israeli menu in December 2013, anticipating that it would appeal to Israeli vegans who account for about five per cent of the population.

Although Domino’s vegan pizza range initially proved a great success with the company struggling to meet demand, the dairy free cheese it was using drew less than favourable reviews, so the chain started searching for a better cheese substitute.

It opted for VBites’ Cheezly after a panel of taste testers said they much preferred it over the pizza chain’s previous vegan cheese.

“We switched to VBites’ Cheezly because it’s considered one of the best dairy-free alternatives to cheese on the market today,” said Ido Friedman, vice president of marketing at Domino’s, in an interview with Israeli newspaper Yediot Aharonot.

“In focus groups and taste tests, VBites’ Cheezly was the variety most preferred by the vegan crowd,” he added.

The company also produces meat-free pizza toppings such as ‘beef’, ‘chicken’, ‘pepperoni’ and ‘chorizo’, all made from 100% natural plant based ingredients. Many VBites’ foods are also kosher and halal approved and pareve.

The pizza chain currently has 55 branches throughout Israel, which is said to have the largest percentage of vegans per capita in the world. ENDS

A leading provider of vegan foods to the health trade, ethical firm VBites produces over 100 different products under the Vegideli, Cheatin’, Making Waves and Cheezly brand names at its UK plant. All VBites’ foods are made from 100% natural plant based ingredients and free from animal products/derivatives, cholesterol, artificial colours, lactose, hydrogenated fats and GMOs. This means they are suitable for vegetarians, vegans and people with special dietary needs, such as those who are lactose or casein intolerant and those looking for healthier and more ethical lifestyles. Many VBites’ foods are also kosher and halal approved and pareve. Based in Corby, UK, VBites has been rated the UK’s most ethical vegetarian foods supplier on ten occasions by the Good Shopping Guide.  It currently exports to 18 countries worldwide.
www.vbitesfoods.com