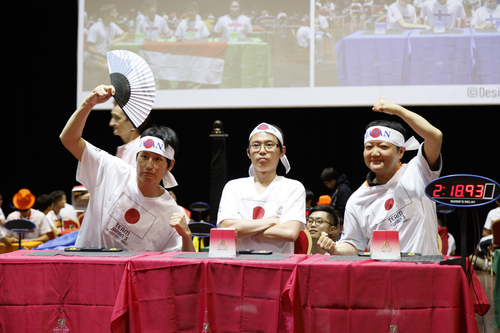 The final cut of the footage taken at the Rubik’s Cube World Championship 2017, held at the Dock Pullman, Paris, from Thursday 13 July to Sunday 16 July, is now available.

The championship, which saw 1,100 competitors from 67 countries assemble to crack the iconic puzzle, was won by speedcuber Max Park from San Diego, CA, with a blistering solving average of 6.85 seconds.

On a dramatic final day of competition, the American surpassed the score of Seung Hyuk Nahm of Korea by a mere 0.17 seconds. Third place was taken by a second American, Lucas Etter, with an average solve time of 7.24 seconds.

The top ten speedcubing competitors were all within two seconds of each other, as shown below:

Meanwhile, the inaugural Rubik’s Nations Cup, which saw national teams of three cubers competing in relay, was won by Germany, with three Rubik’s Cubes solved in a jaw-dropping 25.71 seconds.

Over one thousand competitors from 67 countries attended the Rubik’s Cube World Championship.

The competition’s rules mean that entrants solve the Rubik’s Cube five times. The fastest and slowest attempts are removed and an average time is taken so the competitor with the fastest single solve does not always win.

Ernő Rubik, 73, the Hungarian creator of the iconic Rubik’s Cube, attended the event, and said, “In what some people call a digital world, it’s refreshing to see that the Rubik’s Cube continues to capture the imagination of people of all ages and cultures.

“When I first designed the Rubik’s Cube as a professor of architecture in Budapest, I simply wanted to encourage my pupils to think about spatial relationships. I certainly wouldn’t have imagined that, over forty years later, it would continue to entertain and perplex puzzle-solvers.

“Something about the Rubik’s Cube has piqued the curiosity of a second generation of cube lovers, for whom the quest for speed is never-ending.”

Since its international launch in 1980, an estimated 400 million Rubik’s Cubes have been sold, making it the world’s most popular toy.

HIGHLIGHTS OF SUNDAY 16 JULY AT THE RUBIK’S CUBE WORLD CHAMPIONSHIP:

High-res imagery and footage from the 2017 Rubik’s Cube World Championship are available to journalists. We would be delighted to organise interviews with Chrisi Trussell, spokeswoman for Rubik’s Brand Ltd, and members of the speedcubing community where available.