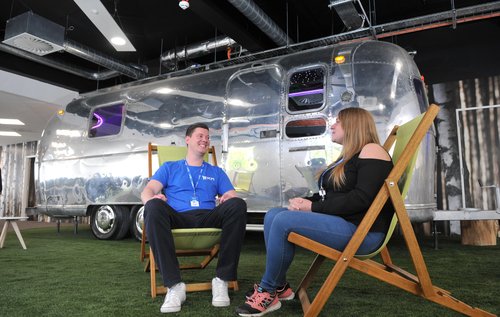 Lancashire tech company EKM is through to the final of a workplace design award after investing £3.5m in major new offices.

The ecommerce specialist’s headquarters were only officially opened in July, but the 23,500 sq ft development has already impressed judges of the Inspired Spaces North initiative.

Taking inspiration from globally-renowned brands such as Google and Facebook, EKM invested in headquarters which house workspaces across three levels, a beautiful LED-lit reception area, an expansive new kitchen and dining area, a high-tech auditorium that can be used by local businesses, and plans for a gym.

There’s also an eye-catching meeting room inside an original Airstream caravan and a giant three storey slide which runs from the top floor to the dining area.

EKM currently employs a team of 85, but the Preston offices have capacity for 250. Antony Chesworth says the size and scale of the project matches the company’s ambitions, taking inspiration from some of the world’s leading brands.

He said: "There are offices that have become world-famous for having funky breakout areas, though the workspaces are still fairly basic. We have built on that idea and made the whole building a cool place to be all day long. If a team member wants a change of environment, they are able to move to another of the themed zones.”

Sharon Snape of Altitude Interiors, who assisted with design, added: “The brief was to make this the coolest workplace in Lancashire, and I think we’ve achieved that.

“We’ve gone for an individual look in each of the areas. Theres a woodland theme downstairs and a more industrial look, with exposed lighting and trunking upstairs.”

The Inspired Spaces North initiative has been created to celebrate “truly outstanding workplaces”. A panel of judges selected the 32 most impressive entries, and the final ten will be chosen through a public vote.

EKM’s video entry can be viewed
here and votes can be cast here voting closes on 31st October 2017.

Antony Chesworth added: “Given the heartache, time and money that has been invested into the office, it’s great to see it shortlisted - and it means a lot that other people love it just as much as the EKM team does!”